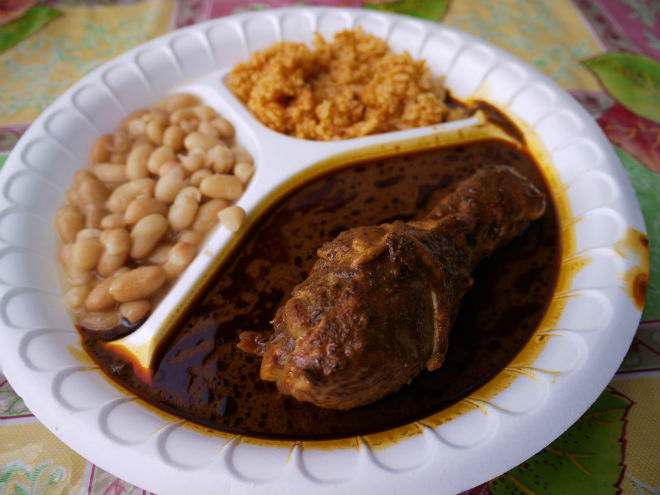 Even if someone knows little about Mexican cuisine they’ve certainly heard of mole, a dish that’s admired for its level of difficulty, colorful varieties, and complex flavor. Yet it’s a dish that’s terribly misunderstood. First Lady of Mexican cuisine chef and cookbook author Patricia Quintana says that “mole is not a sauce, because it behaves differently, a sauce accompanies a dish—the mole is the dish!” Everything that’s served with a mole is used to help scoop up the mole whether it be a small chicken leg or small serving of another protein, tamales, rice, or a bit of beans.

That’s a hard sell here in town since more often than not moles are dull, and become second stringers to whatever protein crowds out the mole on the plate.  While we have some fine and recognized mole masters in town, I’ve found some of our city’s best in an unlikely spot. An unknown stand in South Central Los Angeles, run by a family from Puebla, is making exceptional—and rare—mole poblano, or Pueblan-style mole.

Mole poblano is one of the more baroque moles, having 30 ingredients or more, but this delicious plate delivers what’s most important: balance, a slightly oily texture from lard and a mild spice from the chiles. It commands attention on the plate. On the plate, you’ll also get a boiled chicken leg, rice, and beans that are lightly seasone—so that it is all about the mole poblano.

The majority of moles in Mexico (amazing moles are prepared in every state) are simple, many times only a handful of ingredients as they were prepared in pre-Hispanic times. When in search of good mole, look for the hand written sign that reads “mole poblano pozole.” The mole is the star (it’s mole with chicken, not chicken with mole)—along with a small menu of regional antojitos (little whims) at the best Pueblan-style culinary destination in Los Angeles.

No name Pueblan Stand, San Pedro at 83rd St. in South Central Los Angeles, then follow your nose (uh, just walk west from this intersection up the driveway), Friday afternoon, and Saturday-Sunday from 8 a.m. until the late afternoon.

How One Woman Is Fighting Food Insecurity In L.A.’s Low-Income Communities