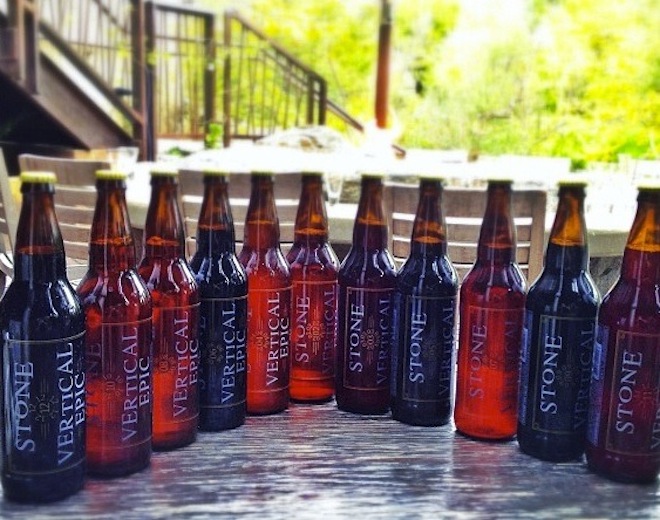 San Diego’s Stone Brewing Co. is marking the end of an era, with the release of Stone 12.12.12 Vertical Epic Ale, the final chapter of a liquid saga that traces its roots back to 2002. Each beer in the series—11 in total—was released one year, one month, and one day after the previous iteration (02.02.02, 03.03.03, etc.), intended to be aged (assuming you had the patience) until after December 12, 2012, so that the entire epic (as in legendary tale) could be told (as in poured) in one epic (as in awesome) vertical tasting.

Every one of the beers, while all Belgian-inspired at their core, was brewed with a different twist and turn, utilizing unique ingredients. The Stone 10.10.10 Vertical Epic Ale, for example, was brewed with a blend of Gewurztraminer, Riesling, and Sauvignon Blanc grapes, whereas the 11.11.11 incorporated cinnamon and Anaheim chiles. 12.12.12 is reminiscent of holiday spice, chock full of cinnamon, nutmeg, allspice, clove, orange peel, and rosehips.

Understanding that not everyone has been cellaring these at home, Stone has dutifully been stashing some kegs away and plans to offer flights of select Vertical Epic Ale vintages in better beer bars around town. Since quantities of the earliest vintages are extremely limited, getting all 11 beers will be a tall order; you’ll have to call out sick from work tomorrow and head down to the Escondido brewery’s Stone Epic Festival to experience the series in its entirety. But fret not: Library Alehouse in Santa Monica and Lucky Baldwins Trappiste Pub & Cafe in East Pasadena will be pouring 10 of the 11 tomorrow beginning at 3 p.m., from Stone 03.03.03 Vertical Epic Ale on to the present.

Other events will follow in the coming days, including this Thursday’s eight-course pairing dinner at Little Bear downtown, and an “End of the World Flight Night” at 38 Degrees Ale House & Grill in Alhambra next Thursday.

Disclosure: I previously worked for Stone Brewing Co., and was the co-author of The Craft of Stone Brewing Co.: Liquid Lore, Epic Recipes, and Unabashed Arrogance. While I’m no longer on the Stone payroll, I do still receive a small royalty on book sales.