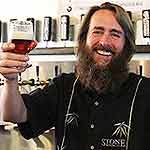 “He’s very serious about beer,” the Stone Brewing Co. P.R. specialist explained after my unexpectedly business-like interview with Stone CEO and co-founder Greg Koch. He is probably the most serious beer guy I’ve ever met, which is surprising considering the last time I saw him he was standing atop the bar at Naja’s Place in Redondo Beach yelling, “No longer will we put up with the fizzy yellow beer!” into a bullhorn to kick off the 2011 L.A. Beer Week. I almost figured this would be an interview of crazy tangents and self-incriminating anecdotes.

But here at the opening of the new Stone Company Store in Pasadena’s Del Mar Station, Koch spoke quietly and seriously about the new beer bar/store while I tried not to stare at his wildly unkempt beard and green-tinged hair, which was courtesy of a dye correction job after he went red for charity.

His new 1,700 sq. ft. store is one of four Stone Company Store locations, but the first one in L.A. (The others are located in San Diego County, nearer to the brewery in Escondido.) With 20 rotating taps, it will accommodate growler fills, flights, tastings, and straight good ol’ drinking, with four-, eight- and 16-ounce pours available. Beer geeks can look forward to one-time releases, special vintages as well as the usual year-rounders.

The store contributes to the growing beer scene in Pasadena, which already has the stalwart Lucky Baldwins Pub as well as Haven Gastropub and Congregation Ale House. But Koch admits that he has had his eye on setting up a camp in town ever since he fell in love with it during his days as a 20-something downtown L.A. dweller.

“I lived in downtown L.A. from ‘87 to ‘95 and I used to love to come up to the Old Town area, though it had a lot less going on than downtown at that time. So I had a little affinity for [Pasadena] and I also had a strong affinity for—and I like supporting—public transportation. So when we saw this spot in the courtyard of the Gold Line, adjacent to Old Town, we were excited about it. And it seemed like a natural.”

But despite its all-too-convenient location at the Metro station, Koch says, “We’re not trying to make this a big destination spot. This is by its intent a neighborhood spot.” It doesn’t serve food but visitors are welcome to bring in their own and sit out on the patio while enjoying a brew.

The beers on tap and available for purchase as bottles in the fridge will most likely vary a bit from the other stores. For instance, while the Stone Company Store – Escondido location had several bottles of the just released Ken Schmidt / Iron Fist / Stone Mint Chocolate Imperial Stout in stock, none were to be found at the Pasadena location, although it was on tap during the opening.

“By its nature, we’re not always going to have the same beers at the same time at each one of the stores because we just want to shake it up and do little, special things here and there,” said Koch. “We don’t want to set an expectation that it’s going to be the same all the time, because it certainly won’t be. Nor will it be the same as the other stores. But I can tell you, we have beers on tap right now that aren’t on tap anywhere else in the world.”

Like what? During my visit, special offerings included Stone Ruination IPA with Habanero Peppers and Stone Mixtape Ale – GK & LU’s Blend vol.1, a blend of seven different Stone beers with sage, lemon thyme, chiles, and Citra hops. And while those are long gone now, they do keep an up-to-date schedule of limited release growler fills on their web site.

So what’s his favorite Stone beer, I asked him in a weak attempt to end things on a—you know—fun note. “Since 1996 I’ve actually worked to help build a world where a ‘favorite,’ the idea of a favorite, the notion of a favorite doesn’t really make sense,” he replied. “I worked to have choice be the predominant factor. When all you had was macro beer, having your favorite brand made sense… because you had loyalty to their marketing, or something else. But in today’s world, the idea of a favorite would just be limiting.”

You gotta love a man who is so serious about his beer.

[EDIT 11/12: A quote attributed to Greg Koch in the first paragraph (“Down with macros!”) was corrected to “No longer will we put up with the fizzy yellow beer!”]