Home Uncategorized STL Pastor Stiffs Applebee’s Server: ‘I Give God 10%, Why Do You... 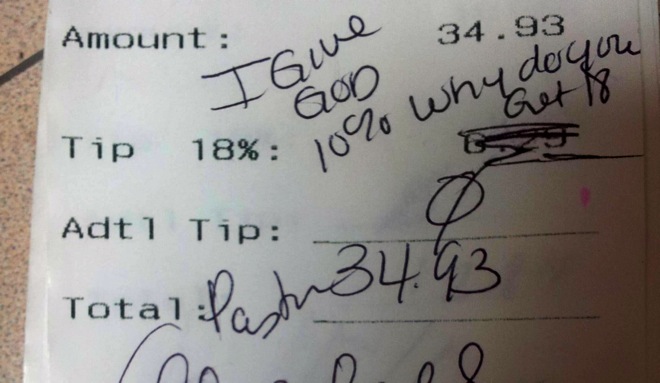 Internet hell broke out after a server from Applebee’s in St. Louis posted this image of a receipt to reddit’s atheism board with the caption: “My mistake sir, I’m sure Jesus will pay for my rent and groceries.”

Pastor Alois Bell, who had dined at Applebee’s with a large group, wasn’t compelled to comply with the automatic 18% gratuity automatically tacked on to parties of more than eight people. She then proceeded to cross out the tip amount that had been added on, writing in a zero, and wrote in her—ahem—two cents: “I give God 10%, why do you get 18?”

Chelsea Welch, then a server at Applebee’s, posted the picture without thinking to obscure the customer’s name, and once the good pastor found out that her oustandingly rude gesture had gone viral on the internet, she allegedly called the restaurant and asked that Chelsea, and anyone else even remotely involved, be terminated. Citing that the customer’s right to privacy had been compromised, Applebee’s did in fact fire her.

Chelsea tells The Consumerist: [emphasis ours]

“When I posted this, I didn’t represent Applebee’s in a bad light. In fact, I didn’t represent them at all. […] But because this person got embarrassed that their selfishness was made public, Applebee’s has made it clear that they would rather lose a dedicated employee than lose an angry customer. That’s a policy I can’t understand.

[…] We make $3.50 an hour. Most of my paychecks are less than pocket change because I have to pay taxes on the tips I make. After sharing my tips with hosts, bussers, and bartenders, I make less than $9/hr on average, before taxes. I come home exhausted, sore, burnt, dirty, and blistered on a good day. And after all that, I can be fired for ‘embarrassing’ someone who directly insults their server on religious grounds.”

Pastor Bell has come forward to The Smoking Gun, calling her actions a “momentary lapse of judgment that has been blown out of proportion.” Going on to explain that it’s all made her heartbroken, she laments: “I’ve brought embarrassment to my church and ministry.”

The other victims in all of this? Applebee’s PR and social media teams, who are taking quite the beating on Facebook and Twitter. They just released the following statement: [emphasis ours]

“Please let us assure you that Applebee’s and every one of our franchisees values our hard working team members and the amazing job they do serving our guests. We recognize the extraordinary effort required and the tremendous contribution they make, and appreciate your recognition and support of our colleagues.

At the same time, as we know you will agree, the guests who visit Applebee’s— people like you—expect and deserve to be treated with professionalism and care in everything we do. That is a universal standard in the hospitality business. That includes respecting and protecting the privacy of every guest, which is why our franchisees who own and operate Applebee’s have strict policies to protect personal information—even guest’s names. […]

As a result of her admission to violating a clear company policy intended to safeguard guests, the team member is no longer employed by the franchisee. Our franchisees are committed to acting in the best interests of guests and team members. This is a regrettable situation and we wish it had never happened. However, the disregard for an important policy left the franchisee no choice but to take the action they did.“

I can appreciate that. Lord knows I wouldn’t be caught dead in an Applebee’s, and if I ever did have to wander in there for some ungodly reason, I hope to high hell that nobody would ever find out about it.