Home Uncategorized Started From the Bottom Now We Here: Diddy and DeLeon Tequila at... 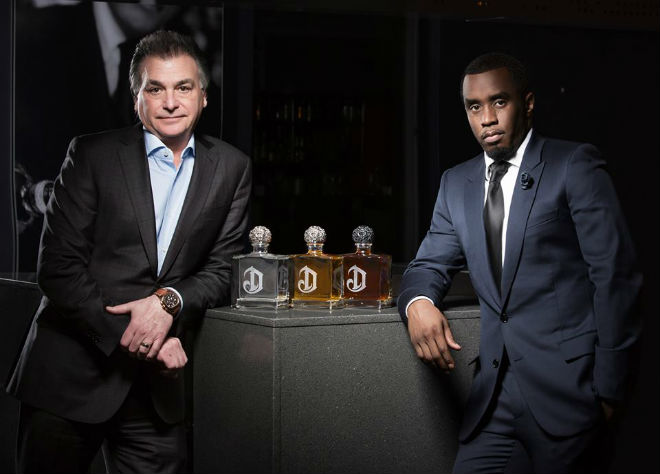 In the same week that tequila-shot popping actor and pop star Justin Timberlake announced that he was collaborating with Sauza tequila on Sauza 901, Bad Boy mogul, Diddy, declared that he now co-owns his first beverage company with Diageo, DeLeon tequila, the luxury brand (or luxury bottle) first introduced by Brent Hocking.

There’s no doubt Diddy can move some liquor. He took Ciroc from 50,000 cases a year to $2 million a year in sales. The leather case, etched glass, and decorative gold finished stopper definitely will look smooth on Diddy’s table, but can the man that gave us Biggy, Sean Jean, and Faith Evans handle Mexico’s macho spirit?

Two nights ago at the 2014 Golden Globes, Diddy seemed like he’d been celebrating a bit back stage as he walked out and interrupted Usher’s spot, reminisced about partying on a boat with Alex Ebert (who won a Gloden Globe for Best Original Score with All is Lost) on the microphone, told everyone to “keep drinking, it’ll all be over soon,” and got dissed by Bono when Bono refused Diddy’s man-kiss.

While some said it was the Ciroc talking, a tweet of Diddy’s ice bucket revealed a near-empty DeLeon silver tequila—yes—the $1,000 tequila was on ice!

In a hip hop culture full of testosterone and bravado, the drinks have always been less than masculine: champagne, malt liquor, vodka, and Red Bull, and other sweet slushy concoctions. Suddenly, the hip hop world is merging with the land of jimadores (agave farmer), cowboys, and cantinas.

My advice to Diddy? Take it out of the ice bucket and sip it slowly, because it’s not sexy to kiss Bono when he doesn’t want to be kissed.