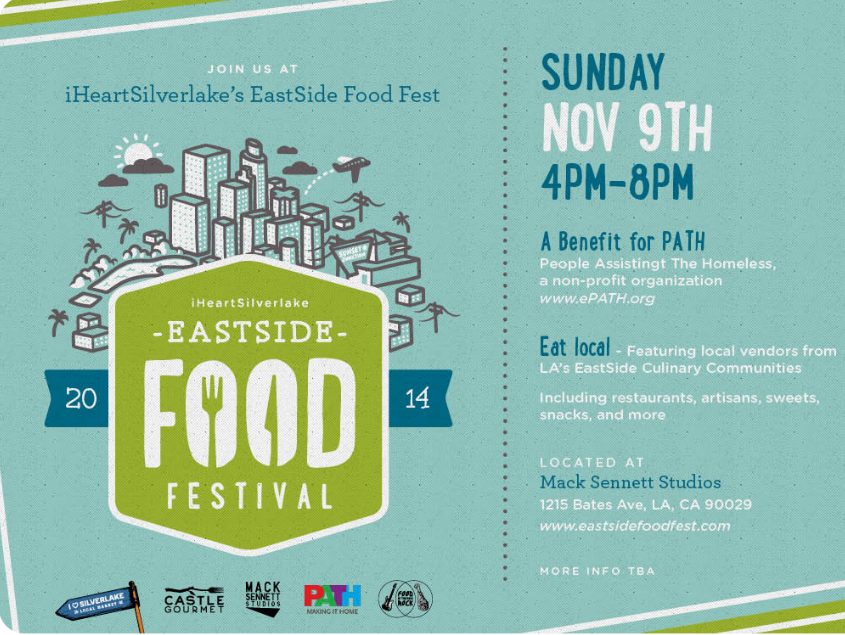 Eastsiders: we bring you pre-holiday tidings of great joy! We’re here to announce the inaugural iHeartSilverlake EastSide Food Festival taking place at Mack Sennett Studios on November 9th, 4 p.m. to 8 p.m., which boasts a line-up of heavy-hitters within the culinary and music worlds.

“With iHeartSilverlake, the idea was to bring together artisans within the local LA communities into one place to share their goods,” says chef and event coordinator Anne Lee Huffman of Castle Gourmet. “These events had been fashion and craft fairs previously. Eventually Jesse Rogg of Mack Sennett Studios approached me about the idea of doing something in the same vein as iHeartSilverlake but with food. The stars had aligned.”

Swing by for a chance to meet local food vendors, restaurateurs, and other community members dedicated to the growth and diversity of the Eastside. A $45 ticket includes all-you-can-eat access to top-notch kitchens and neighborhood favorites alike: Alimento, Carnitas el Momo, Starry Kitchen, Sticky Rice, Homestate, Little Beast, The Oinkster, and McConnell’s Fine Ice Creams, just to name a few.

Several DJs were recruited for the event, including Jason Stewart (a.k.a. Them Jeans) whose witty banter can be heard on his food podcast The Stew (rumor has it that he plans to open a brunch spot in the near future). Head over to the restaurant panel hosted by KCRW’s Evan Kleiman to hear Ari Taymor of Alma, Craig Thornton of Wolvesmouth, Jessica Koslow of Sqirl and Dustin Lancaster of L&E Oyster Bar share their thoughts on the growing indie food scene in Los Angeles. Meanwhile Zach Brooks of “Food is the New Rock” Podcast will chat with Eric Wareheim, Stella Mozgawa (Warpaint), Morgan Kibby (M83), and Mark Trombino of Donut Friend. Spencer Bezaire of L&E Oyster Bar will lead a food demo and Terri Wahl will be signing copies of her new cookbook. It’s safe to say that if you go looking, you’re bound to find something that interests you–an outlook shared by most Eastsiders.

“Food is the main focus, of course,” says Anne Lee Huffman, “but we love it when people like Terri Wahl of Auntie Em’s Kitchen and the punk band Red Aunts put out a cookbook with the tagline A Musician’s Guide to Breakfast and Brunch or how multi-platinum music producer, drummer, and recording artist Mark Trombino opens a vegan friendly donut shop in Highland Park. It’s those types of things that make the Eastside what it is.”

Additional guests and more events to be announced. Tickets can be purchased online.