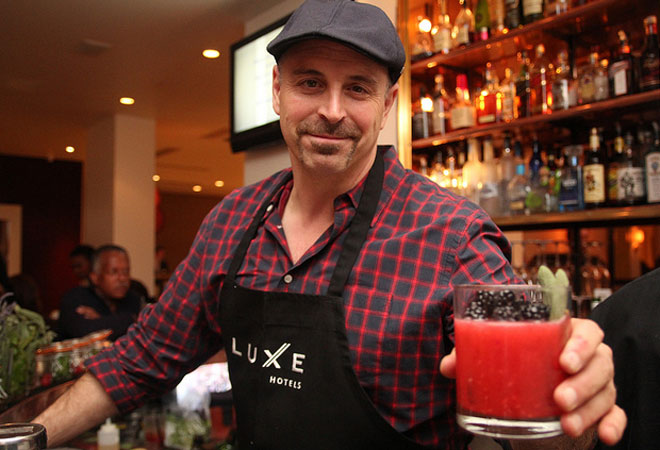 If you were one of the many L.A. cocktail geeks who openly wept upon bartender Matthew Biancaniello’s departure last November from the Hollywood Roosevelt’s Library Bar, a bar he put on everyone’s drink bucket list, then you’ll be happy to know that his new schedule has freed him up for more appearances around town. More Matt for everyone!

Turns out that apart from working on a book, shopping a TV show, doing the cocktail program for On Rodeo Bistro & Lounge Beverly Hills, running cocktail seminars, and popping up at Scoops Westside, Biancaniello will now be working at two bars.

Bar and Kitchen on Sundays: The downtown bar/restaurant in the O Hotel celebrates its 5th anniversary Tuesday, February 5th and will debut Biancaniello’s cocktails. However, not only did he create the new cocktail program, but he’ll be pulling shifts on Sundays! “Bar and Kitchen has a beautiful bar with beautiful spirits that is going to be like going to Sunday school every Sunday,” says Biancaniello. “Look for a lot of excess sherry being infused with mushrooms and collaboration with the chef’s produce from his very own garden and yard.”

Cliff’s Edge on Wednesdays: So far this is just a one-night-a-week gig, but there’s talk that it may eventually become a more permanent situation. Biancaniello used to work with Chef Vartan Abgaryan back at the Hollywood Roosevelt and the two have been itching to collaborate ever since. What can we look forward to? “I’m excited to up the bar program there and start using wild foraged ingredients that I am getting from the Santa Monica mountains,” he says. “I have infused a case of Hendricks gin with stinging nettles and am looking forward to creating cocktails all month with them.”

For both bars, he wants to create new cocktail menus on the fly. “The plan is to get in there and on the nights I work, do a special menu with what I have been working on.” As if all that weren’t enough, Biancaniello says, “Also, I am still looking for a place in Santa Monica or Venice to work once a week.” Any Westsiders have any suggestions for him?