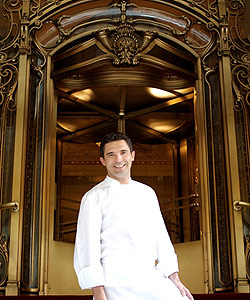 Esnault comes to the Michelin-starred spot via Auberge de L’Ill in Alsace, Louis XV in Monaco and Essex House in New York. But his real cred? Getting a personal recommendation by Splichal’s “good friend” Alain Ducasse:

“I shared with Alain the difficulties I’d had finding the right chef for Patina and he insisted right then and there that I meet Tony, who has worked with him since 1996 and opened Adour in New York,” says Splichal.

Esnault will work alongside Splichal in the Patina kitchen throughout the month of September, eventually developing a new menu by mid-October. Welcome, Tony.

…In other French chef news: Ludovic Lefebvre’s wife Krissy has started her own twitter account under the user name FrenchChefWife. Early tweets include behind the scenes Ludo fun like: “I was nice and did dishes but got in trouble for not respecting his knife and immediately returning to it’s stand. I told u – crazy!!” and “Really, the nerve – hurry up with my cookies so he can cook the chicken. He does not understand what is more important – COOKIES 4 sure.” It’s a must-follow.