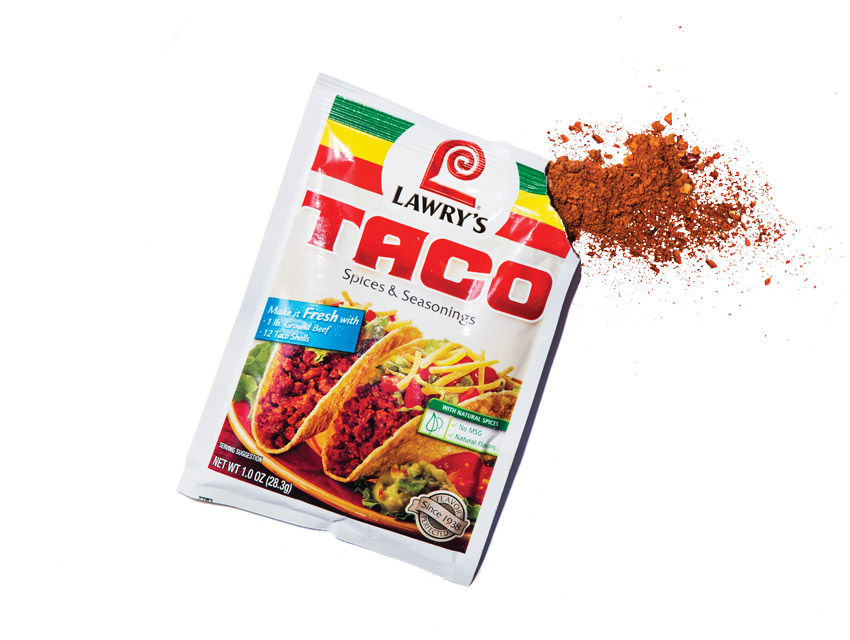 For me, growing up in L.A. during the 1960s, “Taco Night” was a cherished family ritual. My brother and I would happily construct meals from a big pot of burger meat flavored with Lawry’s faintly garlicky, cumin-laced Taco Spices & Seasonings, which we stuffed into crackly fried tortilla shells. Uninitiated friends sometimes needed some cajoling to try “Spanish food,” as Mexican cooking was frequently referred to in certain zip codes. But no one was surprised when their mothers later called us for the recipe.

We never imagined then how deeply the contents of that little white packet—despite its inauthenticity—would help transform a Mexican blue-collar snack into comfort food for millions of Americans. The ingredient’s origins date to 1915, when brothers-in-law Lawrence L. Frank and Theodore Van de Kamp parlayed a $200 investment into an international food and restaurant empire. But it was the phenomenal success of Lawry’s Seasoned Salt, launched in 1938 at the family’s Prime Rib restaurant on La Cienega, that kicked off a line of products that capitalized on the evolving appetites of the era—from Hawaiian and jerk chicken marinades to, in 1967, the taco seasoning mix.

I now thoroughly appreciate the softness of stone-ground organic corn tortillas and the searing snap of bhut jolokia chile-laced salsa, but for its contribution to my palate and the developing tastes of a nation, Lawry’s Taco Spices & Seasonings merits a place of honor in our collective pantry.