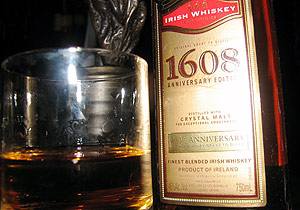 Ever since visiting the medieval disco-themed Prince Bar in Koreatown for their complimentary kimchi pancake (see bar snacks article here), I’ve been obsessed with the high-roller patrons that bars like that attract, ones will throw down for an entire bottle of Scotch that they sip at their stool and, sometimes, offer around. Mainly I’ve been working up the courage to sidle up to such a gent to drink from his bounty. And now I have the precise bar and bottle in mind: Bushmills 1608 Anniversary Edition Irish Whiskey at Seven Grand. A sauced source tipped me off this week that the downtown whiskey bar was pouring the sweet stuff this month. Sure enough they were.

Here’s the skivvy. 400 years ago Bushmills got its liquor license. And the distillery has been churning out reliable single malts since then, no stopping, wars and potato famine be damned. Now, their 10-year workhorse whiskey is fine. Their specialty cask whiskeys are more complicated—fruity, peppery, well known for its roasty, toasty, caramelize-your-face notes. And I hear the Bushmills Rare Aged 21, which is matured in Madeira wood, is killer. But no Bushmills I’ve ever had even comes close to this anniversary concoction.

Unlike most refined, reserve-ish bottles, the stuff is a blend of whiskeys, not from a single pot. But what makes it special is the use of what’s called crystal malts. Which, as I understand it, is basically regular malted barley on crack. It comes out clean and smooth and just a tad smoky, like if Starbucks made a whiskey-macchiato, with creamy toffee candy but with booze instead of syrup. Just be warned, a single shot of this stuff will knock you back in your stool—and in your wallet. It’s $27 for a single pour. But, hey, that’s not bad for a history lesson. The bartenders tell me they have one last bottle of the stuff, so go now or forget it. And if you’re buying the entire bottle, I can be there whenever works for you.

Evan George is a contributor to Los Angeles Magazine, a five-time grilled cheese champion and a co-editor of the beer-cooking blog “Hot Knives.”