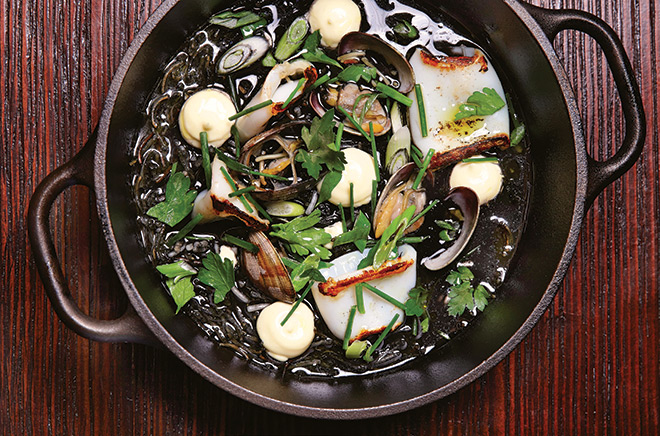 Filled with rosemary, thyme, lemon, and garlic, the whole grilled fish at smoke.oil.salt sits over almond- and orange-wood coals before being arranged on an oval plate with a dollop of garum, a thick paste of anchovies, olives, mint, and tarragon. The dish is so seemingly simple, so direct, that it’s easy to miss the technique that goes into it. Chef Perfecto Rocher is from Villalonga, Spain, a small village south of Valencia, and there’s a naturalness to his food—a pleasure in the straightforward presentation—that captures the best of Spanish cuisine.

From the moment the dishes begin to land at your table, you sense a chef who wants to enlighten people about the food he grew up on. Here a bowl of fried smelt needs nothing more than the preserved lemon slices and fennel. Rocher livens up a side dish of swiss chard with pine nuts, pickled raisins, and garlic. A tumbler of white almond gazpacho comes dotted with opaline olive oil and rides the acidic rails of sherry and muscatel vinegars—the go-to elixir for cooling off on a hot afternoon in Seville.

Despite occasional departures to such southerly regions, much of the one-page menu focuses on the more northerly coastal provinces of Catalonia and Valencia. As Colman Andrews observed in his classic Catalan Cuisine, the uniqueness of the style lies in how it “constantly refers back to itself,…adapts one technique or ingredient to more than one use.” You see that customization at play in the different ways Rocher adopts the time-honored foundation of ground roasted almonds and hazelnuts—essentially the Catalan roux—for his salbitxada and xató sauces. The first he amplifies with extra tomato and sweet pimentón, a smoked paprika, to extend the flavors of charred green calçot onions; the second is augmented with nyora peppers, the heat helping to parry the bold picadeta, a garnish of rosemary, lemon, thyme, and garlic with which he finishes a grilled fillet of pork.

The restaurant’s pair of tight dining rooms are located beneath a tattoo shop in Evan Kleiman’s old Angeli Caffe space, and they’re as casual as a tapas bar (though nobody on staff here would utter the term for fear it’s become too broad a brushstroke). Even when I’m looking out the window onto prime Melrose, I can practically see the wisps of nostalgia drifting by as the chatter of diners ricochets off portraits of Dalí and cover art from Miles Davis’s Sketches of Spain. The son of an expatriate poet who’d strung out his GI Bill money living on the Iberian Peninsula, I was born in Madrid, where the pepito steak sandwich, the chorizo-studded chickpea stew cocido, and the scent of frying garlic formed the primer coat of my food consciousness. In the summer I’d go to fairs in northwest Galicia and watch as the women, never too young for black mourning clothes, it seemed, pulled octopus from the boiling pots and used scissors to cut the tentacles onto wood plates.

Rocher’s octopus isn’t that different. After blanching them (which helps keep the skin from slipping off), he places the tentacles in a pressure cooker with red wine before giving them a hit of smoke over the fire (too long, and they lose their bounce, leaning more toward the tender style eaten in Italy). Then he arranges the slices atop disks of boiled potatoes, showering the whole with a vinaigrette and some pimentón oil. Yeah, the same pimentón is in the salbitxada, but Rocher seems hell-bent on proving how the recurring elements of the Catalan table can create endless permutations. You can often find the chef by the smoldering grill at the back of the brick-walled room, expediting dishes as co-owner Stephen Gelber and sommelier Naureen Zaim pour from a smart collection of Spanish wines. A txakolina rosé underscores the acidity of a saucer of matrimoni, anchovies, Marcona almonds, and olives splashed with vinegar; the subtle flavors of Anima Negra, a claretlike wine from the island of Mallorca, cushion the earthy intensity of hand-cut Ibérico ham.

Gelber had fallen in love with Spain while on vacation before he partnered with Umami Bur-ger founder Adam Fleischman to launch smoke.oil.salt. Rocher, who’s 35, trained in London (OK, he also went for the music scene), and his résumé bobs with the names you’d expect: Ferran Adrià, of course, and having moved to northern California, Gary Danko and David Kinch. In L.A. he’d sneak a few Valencian specialties onto the extensive menu at the Blvd at the Beverly Wilshire before taking over Josef Centeno’s slot at Lazy Ox downtown.

So the guy’s been around, though you can still spot him trying to get a feel for things here and there. The scallops that are supposed to be cooked a la plancha have the golden crust you get from sautéing; as faults go, it’s not a biggie, but the flesh would gain immensely by having the dry sear of the metal plate for which the technique is named. The caviar-speckled sea urchin flan is a dish whose loftiness feels out of touch with the rest of the menu. Rocher points to an old regional recipe he found for béchamel with uni, but it seems more like shadowboxing than coming at the palate with the straight left, the way the best dishes here do. I also wish Rocher were more of an ambassador with the desserts. While the crema catalana, the forefather of crème brûlée, is good, the vanilla cream that’s been piped onto the coconut flan, another dessert, recalls the forced flourishes of cafeteria food. And the xoxolata—half-inch cubes of chocolate pâté cut from a baking tray and sprinkled with bread crumbs, organic olive oil, and smoked salt—doesn’t show much inspiration beyond riffing on the restaurant’s name. Out of the fire: Octopus and potato with vinaigrette and pimentón oil; grilled spring onions with salbitxada sauce

It’s a catchy moniker, too, as evocative and efficient as, say, 800 Degrees, Umami Burger, and ChocoChicken—Fleisch-man projects all (as titles go, Red Medicine, another place he’s backed, may be the anomaly). Except for being a little trigger-happy with the word smoked on the menu (I counted four) and being occasionally heavy-handed with the salt, Rocher does a good job of keeping his stylistic options open. That’s a very Spanish way of operating. Unlike Italy, where the cooking ideal is bound in the home, and France, where the apex is reached in the restaurant, Spain splits the difference. In old-school warhorses like Segovia’s Mesón de Cándido, whose suckling pig has been served to generations of tourists, and even with such shining stars as artisan griller Victor Arguinzoniz’s Asador Extebarri, the fires of the hearth are what drive the enterprise. If El Bulli had been more than an aberration along this homey continuum, its closing in 2011 wouldn’t have seemed like the end of an era.

Rocher ably straddles that divide between home and haute. His cooking may be at its most domestic with the béchamel laced with meat juices that he stuffs into his cannelloni, a recipe modeled after his mother Rosa’s. On the flip side, before frying the potatoes that go in a cast-iron dish with a fried egg and leaves of Serrano ham, he oil poaches and freezes them. It’s a method he picked up from Heston Blumenthal, the celebrated talent behind the Fat Duck in England. Rocher also serves a salpicón, a mussel and oyster cocktail, bathed in spicy horchata. Unlike rice-based Mexican horchata, Valencian horchata is derived from chufa nuts. Rocher says it’s what everyone in Villalonga has in the afternoon with a bit of sweet, brioche-like cake. In America the obligatory paella all too often seems a starchy, laden accompaniment to the pitcher of sangría; Rocher’s has the easy fluency of the dish found in the countryside near his hometown. Available only on Sundays as part of a prix fixe menu, tinged green from favas and artichoke and strafed with hunks of braised rabbit, the rice has the bite of having been over a wood flame.

I knew I liked his tripe, thick with chickpeas and tender as any East L.A. menudo, but it took me two visits to understand its careful construction: chorizo bringing a pleasing oiliness, the citrus zest and minced parsley making it familiar to those who’ve never tasted tripe before. Probably the best example of this quiet engineering is the cassoleta de fideua negra, a regional specialty that, like paella, is named for the utensil it’s prepared in. Glistening and black in a cast-iron pot, Rocher’s rendition is a maritime stew of inch-long pasta strands, clams, and calamari segments that have simmered in a stock of shrimp heads and cuttlefish ink.

The result is soupy yet solid around the edges, like a great risotto. What you don’t see is that just before serving, Rocher folds in an aioli sweetened with honey to round out the flavors and build in an element of airiness. The cassoleta requires crazy-level obsession to get right in a restaurant where the dishes are flying from the kitchen. Rich without being leaden, earthy yet billowing with the oceanic tang of squid ink, it’s almost as satisfying the next day when you heat the leftovers in a microwave.

Drinks : No liquor license; excellent selection of Spanish wines, with some regional finds