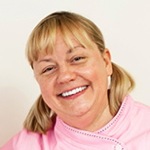 Renowned pastry chef Sherry Yard is gearing up to leave Spago, after working with Wolfy P. for close to 20 years. But before she takes off to re-open the long-shuttered Helms Bakery in Culver City with Sang Yoon, she decided to stop by KCRW to participate in their Guest DJ program, laying out a little bit about herself and her life through songs.

Yard also reveals how she originally began working with Papa Puck, saying that she had a message on her answering machine: “Hi, I’m Wolfgang; you have to call me back.” Thinking the number was fake, she still called back, only to find out that it was indeed Spago on the other end of the line. She was on a plane to L.A. two days later, with $200 in her pocket and two pieces of carry-on luggage, and she’s been here ever since.

For the full transcript or to listen to the podcast (just under 10 minutes long), head to the KCRW Guest DJ Project page.