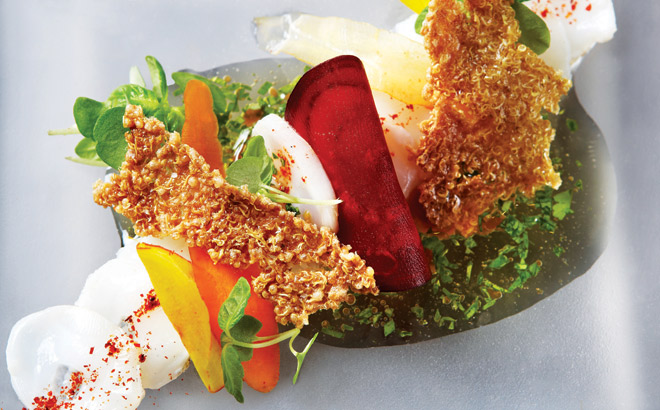 Carlos the barman wears a spread collar and bow tie. A customer in cuff links stops to fist-bump him as he walks to his usual table. The regulars are returning to the good ship Spago. Closed for two months while a construction crew knocked down walls, doing away with woodwork and murals, the restaurant that carried so many Angelenos into the sea of gastronomy in the days of big hair and padded shoulders hasn’t been remodeled; lesser restaurants remodel. Spago has been retrofitted—scraped free of barnacles, trimmed down, and pointed toward the wind like a racing yacht ready for its next challenge.

Launched in 1982 above Sunset Boulevard and becoming an Industry power den before Wolfgang Puck moved the show to Canon Drive 15 years ago, Spago is that rare thing in a city known for its casual restaurants: a fine-dining institution. The recent closure of Campanile, which Puck colleagues Mark Peel and Nancy Silverton opened in 1989, only underscores Spago’s venerable history. In Puck, an Austrian toque who’d learned his trade at such French legends as L’Oustau de Baumanière, we found a chef who could pierce the white tablecloth’s shell of pretension with a single wood-fired pizza, its singed crust draped with lox, as if the recipe had been passed down from a knish-loving grandmother. Together with his then-wife (and current partner), Barbara Lazaroff, he was the first to cross-fertilize fine dining with fun while always nudging us onward.

This was the restaurant that legitimized the open kitchen, inflected wood grilling with Asian influences, and overthrew the hegemony of sauces in high-end cooking by putting Chino Farms’ produce front and center. Even as he leveraged his name with spin-offs and clones and frozen dinners (as well as the occasional Röcktoberfest stint with Gene Simmons), Puck has ably maintained Spago’s standards, its aura. You may glimpse Clooney by one of the olive trees on the patio, but there’s no impatience in the veteran waitress who snaps pictures of a Japanese couple at their table in the revamped dining room.

Longtime society decorator Waldo Fernandez—he gave Soho House and Mezze their look—has lost the hand-blown glass that Lazaroff had installed, replacing it with damask-covered sconces. Artwork by Ed Ru-scha and Doug Aitken adorns the space, whose flow has been vastly improved now that the wall between the dining room and patio (fitted with a retractable roof) has been removed. Adding to the open feel is the friendly welcome; gone are the days when you’d get a quick sizing up at the door and be marched past Marvin Davis to a table in the back. With no partition between patio and dining room, that sense of exclusivity has vanished. As the kitchen crouches like a brooding beast behind plate glass, flames reddening the clouds of steam, a massive new skylight sheds a flattering glow at sundown, and at night twin fire pits warm the atmosphere. It has emerged as a quintessential expanse. The mood is echt L.A.—casual with lots of zeros.

From the beginning, Wolfgang Puck has pushed food toward elegance without ever allowing it to become congealed and proper. He can’t forget the classic clarity of his training, but he makes sure it remains in the background as a distant motif. Even on those groundbreaking pizzas, the Santa Barbara shrimp were deveined, the basil cut into a chiffonade only at the last minute to keep the leaves from darkening. Of course it’s hard to know how many of the current dishes were created by the peripatetic celebrity of today, but executive chef Lee Hefter and chef de cuisine Tetsu Yahagi have worked with Puck long enough (nearly three decades between them) to capture his vision with brilliant dishes like the grilled whole turbot. The fish, whose delicate white flesh is revered by chefs, is filleted tableside and garnished with a mix of flageolet beans, chorizo, and tendrils of calamari to create a magnificently refined fisherman’s stew.

This rustic fascination in-fuses the menu. Discs of vellum-thin octopus tentacles, the citrus vinaigrette jacked with powdered Espelette pepper, hits some Basque-Japanese ideal. A salmon main course might come with shell beans and forest mushrooms or simply with charred romaine hearts that have been rolled in chopped anchovies. Among my favorites is skate wing that’s been dabbed with sambal, then wrapped in bamboo leaves and grilled, as if it were from a food cart in Asia. Having devoured the fish, I’ve squeezed the pungent calamansi lime into the leftover juices, using the leaf to slurp them up.

When the kitchen loses that balance between haute and robust, things can fall flat. Barely searing the langoustines in an appetizer with matsutake mushrooms is a sure way to deny them their ultimate power. You want these puppies hot from the pan with their caramelized juices a bright shade of orange. Veal filet tartare gains nothing by being served primly inside clean bones capped with a layer of smoked mascarpone, and it lacks the requisite kick of capers and shallots. Maybe the chefs believe such elements would overshadow the taste of the veal. But what taste? Tartare is usually made with the more forceful chopped beef for a reason, to let hardy ingredients have at it.

I’d certainly trade that dish to get the beloved gnocchi back (“The gnocchi are gone?” a man at the bar cried one night, but they disappeared when the menu was condensed to a single page). Though the kitchen has held on to the corn agnolotti—the dough just tensile enough to hold the creamed niblets—it’s also cut loose the schnitzel and the kaiserschmarrn dessert, Austrian specialties that Puck, a son of Carinthia, had kept on the menu for years. There was a homey quality to the golden bread crumbs that clung to the cutlet.

I miss that personal touch, but I get it: Spago is not a museum. It has to keep advancing in the hunt for inspiration. I didn’t think there was a version of roasted brussels sprouts I hadn’t tried, but the miso-maple glaze on the ones here highlighted how wrong I was. Smoked fingerling potato purée—a gorgeously lush side dish—is a riff on pommes mousseline, an old-school preparation from Escoffier with a couple of buzzwordy adjectives. Moroccan spices add a musky charge to the Colorado lamb chops, and the simple addition of nori butter lends spot prawns a whole new aspect.

That’s how I like to eat at Spago: with no presuppositions about what might be coming or what shape the listed ingredients might take. Sauce Choron, a tomato-freight-ed hollandaise, provides rich acidity to a main course of chicken flecked with pastrami spices and topped with a rye bread crisp. The same pink hue of Thousand Island, it winks at the Reuben sandwich. With the mock-classic Monkfish “Yabba-Dabba-Doo,” Yahagi rolls the fish in bacon with a trompe l’oeil heart of palm “bone” sticking out as if it were an old-fashioned meat cutlet served under a silver dome.

Along with that more impish streak, Puck has nursed a passion for Chinese food through several decades, beginning with Santa Monica’s Chinois on Main, which opened in 1983. Where that restaurant was Sino-Cal-Med with a dash of bistro (veal kidneys with mustard sauce), Puck’s WP24, atop downtown’s Ritz-Carlton, plays it straight with lettuce cups and whole steamed fish. Here at Spago you might spot Hong Kong-style whole lobster, but far more interesting to me are dishes that depend on a Chinese aesthetic without being overtly Chinese. A translucent kumquat sauce, the color of burnished leather that sets off the crisp skin of Carpenter Ranch squab, recalls the Peking ducks you see hanging in Chinatown storefronts. But the allusion can be as subtle as the sesame oil in the dinner rolls or the circle of caramelized daikon root that draws out the earthiness of the tender pork cheek and jowl.

You’ll certainly find something on the world-class wine list to accompany each dish. As with the rest of the restaurant, there is little pretense in this area. For those who want the ’96 Echezéaux from Henri Jayer for $1,750, it’s here. But if one of the team of sommeliers thinks decanting will encourage a $50 red to open up, they’ll do it—and bring out the big glasses for swirling, too. You can follow that toward meal’s end with a flute of sparkling pear cider from an artisan in Normandy, its farmhouse sparkle and fruity core the perfect accompaniment for Sherry Yard’s desserts.

Working under Puck since 1994 and a star herself in the pastry world, Yard has a lineup that shows her at one of the finest moments of their long association. Absent are the overly cute inside-out éclairs of Cut, Puck’s steak house in the Beverly Wilshire. Instead we get a more grounded playfulness. A caramel-bourbon pain perdu—a shortbread roll filled with fig puree and garnished with a tumble of just-caramelized pear quarters—tastes like the best Fig Newton you’ve ever had. The chocolate “Black Bowl,” a receptacle that resembles Darth Vader’s helmet, is stacked with five layers of such goodies as espresso “air,” cardamom ice, and boulders of crunchy dark cookies, all finished with a ganache that’s as crisp, thin, and crackling as early pond ice.

Occasionally a group will turn from dipping spoons into Yard’s creations to whis-per, “There’s Wolf.” And you’ll see the white-jacketed figure pumping some hands or standing to the side surveying the room. In the silvery light that bathes the crowd from the backlit art, I find it hard not to feel the nostalgia that Puck—moving locations, relaunching, pushing merch, promoting his app—doesn’t allow himself. He moved to the United States to work the flambé circuit in a restaurant at the top of an Indianapolis office tower. He became this city’s essential chef because forward is the only direction he moves in. Like an old Hollywood producer, his goal is always to create memories for others and not bask in them himself.

Drinks: Superb wine selection and cocktail program; some reasonable prices to be found among the storied wines