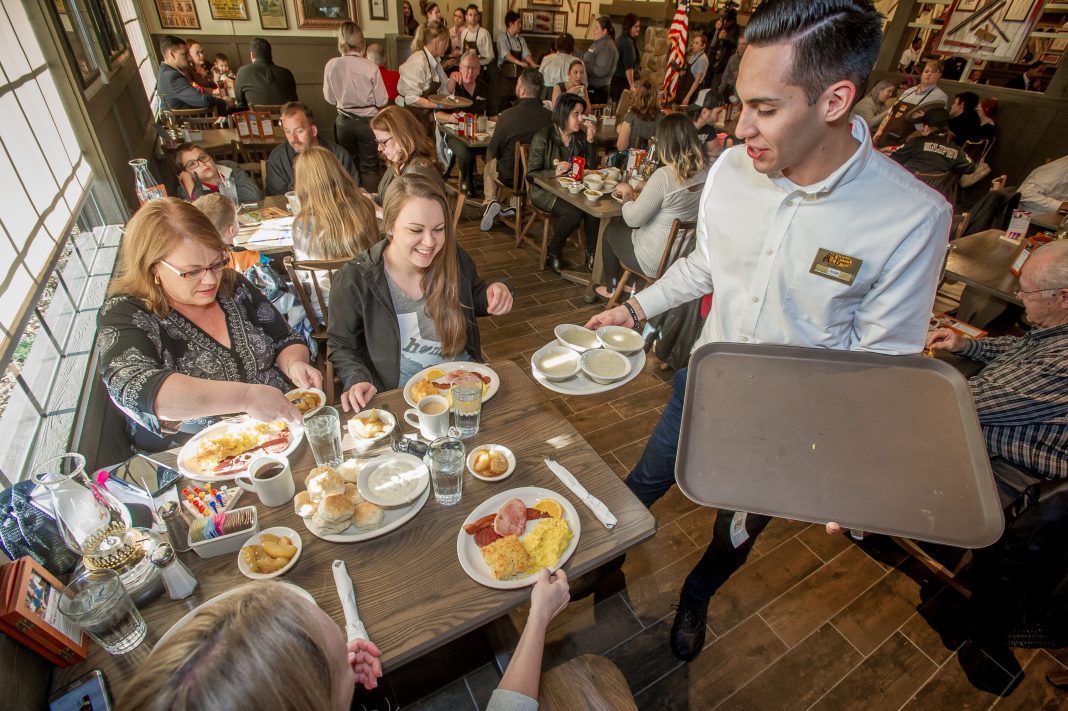 Imagine you’re a Boy Scout troop leader ushering a dozen-plus ravenous adolescents back from some camping excursion or wilderness jamboree or knot-tying extravaganza. You’re on the I-15 headed back Pasadena way when you spy the big, brown facade of Cracker Barrel Old Country Store, the Tennessee-based restaurant chain known for down-home cooking, country kitsch, at least a couple of instances of alleged discrimination, and, most importantly for your purposes, massive dining rooms well equipped to handle large parties of Baptist churchgoers, Red Hat ladies, and hungry pre-teens in jaunty neckerchiefs.

Now imagine pulling off the highway, unloading the gang, and discovering that the wait for a table is between three-and-a-half and four hours—and that’s for a party of three.

According to Cracker Barrel’s PR rep, people began queueing up the night before the opening, and by 6 a.m., 150 people were in line and the wait for a table was an hour for any new arrivals. By noon on opening day—a Monday—the wait was two-and-a-half hours.

I’m forever fascinated by our lust for new-to-you chains, sit-down restaurants and fast-food franchises alike. In 2014, I covered the opening of the first Olive Garden in Chicago proper, an event so momentous that the governor of Illinois showed up for a ribbon cutting and the wait for a table was nearly an hour on a week night, even though there were already a handful of Olive Gardens in nearby suburbs. That same year, here in L.A., Dunkin’ Donuts’ returns to Southern California was cause for similar commotion, even though Los Angeles is home to approximately five billion doughnut shops. And more recently, in 2016, Shake Shack’s first California outpost opened in West Hollywood and lines were so long the L.A. Times wouldn’t even talk about how long they were—even though In-N-Out is a source of local pride and indulging in an East Coast chain’s similarly constructed burgers is tantamount to cheating on a spouse. Speaking of which, remember when In-N-Out arrived in Texas? A Dallas Morning News videographer captured a woman actually crying tears of joy.

Being granted access to a new chain restaurant is like finally being let in on a secret that people in other regions have been greedily guarding for no other reason than to preserve their fragile sense of superiority. So, when the occasion arrises, we’ll happily swallow our pride and wait in line, fueled by some combination of pent-up resentment, actual curiosity, and years of brainwashing designed to preserve corporate culinary hegemony. (For a look at a similar phenomenon, please see the Onion evergreen, “Vacationing Man Excited to Try Fast Food Franchise Not Found in Hometown.”)

Anthropology and psychology aside, I have to admit that I really like the food at Cracker Barrel. When my family moved from a suburb of New York City to the Florida suburbs when I was young, eating at the chain was my first introduction to certain Southern dishes that would become comfort-food staples and which I’ve continued to fetishize during the many years I’ve lived outside the region. Yeah, you can get fried okra in the frozen aisle any Ralph’s or Vons—but it’s kind of not the same.

That said, waiting for three hours for a table at Cracker Barrel is nuts, and I wouldn’t have done it if my friends and I hadn’t schlepped all the way out to San Bernardino County with biscuits on the brain. The scout leader I encountered in the parking lot did not stay. Neither did the woman I met in line who admitted she’d eaten at a Cracker Barrel once before and didn’t really care for it, but thought she could stand to give it another shot since it seemed to mean a lot to her friend. The eatery is a new addition to Victorville’s so-called Restaurant Row, a chain-restaurant bonanza that includes a BJ’s Brewhouse, Chili’s, Panera Bread, and the Habit, a burger chain that recently expanded to Echo Park. Suffice it to say there are other options.

Once our name and the number of people in our party had been entered into an aproned employee’s tablet, we were free to leave the premises and kill time elsewhere, and luckily there are at least a handful of ways to kill time in Victorville. Across the 15 there is the Victor Bowl, as well as the Scandia Family Fun Center, which has two mini-golf courses, bumper boats, batting cages, and a terrifying looking thing called the Sky Screamer. We opted for the California Route 66 Museum, located in what’s left of downtown Victorville. The town’s historic core was ravaged by the arrival of the freeway, but the Victorville of yore is documented with care inside charming museum, which has everything from an old Model T you can actually sit in to a collection of old yearbooks from the local high school. When the volunteer docent asked what brought us and we said Cracker Barrel, a woman standing behind us said she and her husband were waiting for a table too. It’s ironic that a freeway-adjacent corporate chain would be a thing bringing tourists back to town, at least for the time being.

The wait also gave us ample time to read up on the allegations of discrimination that have plagued the brand for nearly 30 years. In the early ’90s, the company openly fired gay employees for—no joke—failing to “demonstrate normal heterosexual values which have been the foundation of families in our society,” but rescinded the policy when it landed them in hot water. More recently, the company was sued by the NAACP for allegedly segregating black customers by seating them in the smoking section and then giving them subpar service. The chain never admitted wrongdoing, but settled the lawsuit for $8.7 million.

Following a reservations system malfunction I won’t belabor here (important note: if you plan on visiting anytime soon, you can and should join the waitlist via Cracker Barrel’s website), we were seated approximately two-and-a-half hours after our initial arrival. The hungry eyes all around us in the brightly lit dining room lent an authentic Dust Bowl-era feel to the proceedings, perhaps even more so than the folksy bric-a-brac—farming implements, old road signs, taxidermied deer heads—hanging on the walls. Despite the crowd, our food came quickly. I ordered the Chicken n’ Dumplins, slippery scraps of boiled dough with naked poached chicken tenders, along with turnip greens (don’t neglect to add vinegar), fried okra with a side of ranch for dipping, and their famous hash brown casserole, a favorite with vegetarian diners who don’t realize or care that it’s made with chicken stock.

It was everything I’d dreamed it would be during my long self-imposed exile from Cracker Barrel country and nothing more: a little bland, extremely filling, very comforting. Chain restaurants are nothing if not predictably, reliably, wonderfully OK.

RELATED: The Only Burger in L.A. You Should Be Comparing to Shake Shack