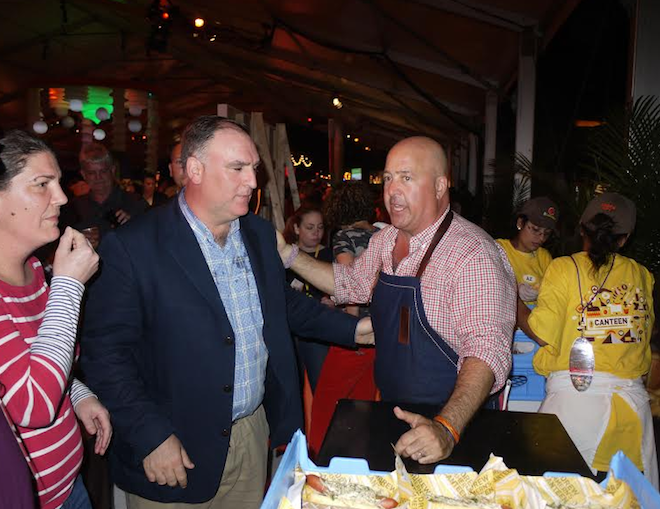 Last weekend, I attended the glamorous South Beach Wine and Food Festival (SOBEWFF) presented by Food and Wine Magazine as a judge and panelist for the Best of the Munchies: People’s Choice Awards hosted by Andrew Zimmern. I also got to take in several events and interview chefs from Los Angeles, around the U.S., and across the globe—they all think we have it pretty good out here in L.A.

Chef Sherry Yard, who will be resurrecting the Helms Bakery along with chef Sang Yoon thinks “L.A. has the best ethnic food in the U.S.” Yard is excited about the new restaurants opening up here in town but would like to see a return of elegance and service to our fancy restaurants. Besides Helms, Yard also delivered a state of the U.S bakeries address and L.A.’s bakery scene is really heating up.

I caught up with chef Jonathan Waxman who said that L.A.’s culinary scene is “healthy, diverse, and it’s the ethnicity, that’s so brutally important, and the interchange of young, middle, and old—downtown is happening, and there are these neighborhoods with so much regionality… And the farmer’s markets in L.A. are the best thing in the world.”

Cookbook author, Ingrid Hoffmann, was on hand to sign books, and prepare some dishes for a farm to table dinner sees an “evolution from Mexican cuisine to Colombian (Hoffmann is Colombian) and South American that’s really happening right now across the U.S.”  When she’s able to slip away for a quick bite during business trips to L.A., Hoffmann loves Nancy Silverton and Mario Batali’s Pizzeria Mozza, and Osteria Mozza, too.

Peru’s culinary ambassador, chef Gaston Acurio, gave a cooking demo at Saturday’s Grand Tasting and said told me that “in the last 20 years, a community of chefs all over Latin America have been working together to get to this point” [where the food is attaining worldwide attention].  When I asked who’s leading the charge for Peru in the U.S., Acurio replied that our own chef Ricardo Zarate “believed in Peru even before it was popular in the U.S., and is doing great things with Mo-Chica, Picca, and Paiche.” Endorsement?—that’s practically a knighthood.

Chef Jose Andres thinks that Acurio has been an “agent of change in Peru”, and believes cooking has the power to influence cultural development. Andres said, “Has food helped Spain move forward during hard time—yes?—gastronomy is a way forward.” The charismatic Spanish chef wanted to remind the world that “ where did Wolfgang Puck, and Joaquim Splichal create their empires?—where did all these great fast food concepts like 800 degrees, and Umami Burger from my friend Adam Fleischman start? The great Koreantown, the great Japantown, and my boy [chef] Roy Choi?”—Los Angeles.