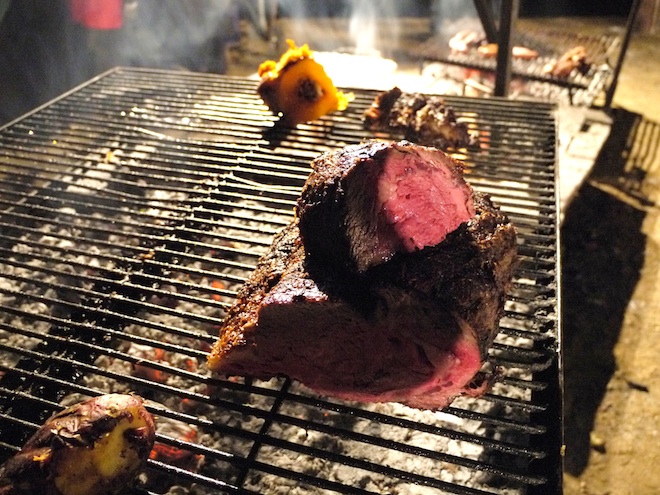 Some months ago, I fell into back to back evenings of dinners by two of South America’s greatests chefs: Argentine grill master and author of 7 Fires: Grilling the Argentine Way, Chef Francis Mallman, and Chilean star Chef, Rodolfo Guzman of Santiago de Chile’s Boragó sponsored by Foods From Chile.

In a lavish West Hollywood Hills home, Mallman casually directed a crew of local Argentine asado caterers, The Gauchos, around an impressive array of roasting stations. Attendees flashing Versace and Giorgio Armani rushed the carving table for flank steaks, blood sausages, and chorizos. High above the Sunset Strip, it was a very Patagonia-meets-Entourage sort of scene.

Guzman spoke intensely about the indigenous Chilean influences in his cooking—especially the Mapuche and Picunche natives. He aims for a final product that is “rustic, wild, but in the vanguard.”

Why is Chile such an attraction these days? “We[Chileans] have one of the cleanest oceans on the planet, and we have the safest places in Latin America”, explained Guzman.

The meal at Playa highlighted some of the Chilean food products available in Los Angeles, including blueberries, salmon, mussels, and apples. Guzman prepared traditional dishes like curanto, or pit smoked seafood, featuring Chilean mussels, and rescoldo, or flat bread cooked on coals, where Guzman cleverly substituted Chilean salmon covered in dark embers for the bread.

Peruvian is on fire. Iconic South American chefs are popping up at fancy Hollywood parties, and last night, oh, just Chef Alex Atala—owner and chef of the 4th best restaurant in the world, D.O.M—stopped by to chat. No matter what’s trending in Latin America, Los Angeles is at the tip of the gaucho’s sword.

As Protests Rage in Chile, These Patchwork Pictures Are More Relevant than Ever