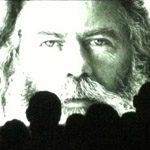 I recently attended a special screening of Maria Demopoulos and Jodi Wille’s documentary The Source Family at the Standard Hotel in West Hollywood. The archetypal 1970’s L.A. cult revolved around Jim Baker, a violent ex-marine turned charismatic owner of a health food restaurant on the Sunset Strip who eventually talked 140 doe-eyed hippies into sharing his 3-bedroom rental in Los Feliz.

The party captured the carefree cheer and Omphaloskepsis of the era, with the hypnotic rhythms of the Source Family band Ya Ho Wha 13, waiters serving mushroom loaf and several other dishes from the original restaurant, a lobby filled with art and artifacts from the colony, and best of all, dozens of smiling white-robed believers holding hands and mingling with the crowd. These ladies know how to transport you.

You can find the film on iTunes, or better yet, Cinefamily will continue the rebirth with a pop-up restaurant and a weeklong engagement of the film. Don’t try to go to the original Source on Sunset, it is now Cabo Cantina, and filled with neon and margaritas. In 2013 Father Yod’s fireplace is covered with a Tecate banner.

The lobby at the Standard became a human lobster tank that night, and bright television lights blinded me as I shuffled towards the Sunset Boulevard exit. Surrounded by the smiling devotees, and dazed by the booming sounds of cult rock I was shocked when a young lady with long wet hair came out of nowhere and kissed me hard on the lips. I suddenly felt at one with the Source.