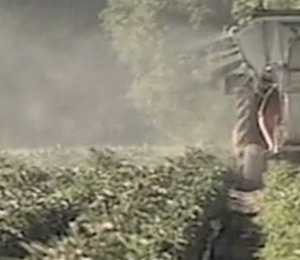 If you’re an organic junkie and you want to shout your enthusiasm for pesticide-free greens and free-range chicken from the rooftops, here’s a way: Host a Fresh party. For $30 the folks at freshthemovie.com will send you a screening copy of the documentary they released this summer with the good-faith agreement that you can—and will—show it to up to 20 people.

Sounded like a soirée to me, so I recently invited over family and a few organically inclined friends for an evening of “reinventing the food chain.” We nibbled on triple-cream MT TAM cheese from Cowgirl Creamery, then moved on to an alfresco feast—“It’s all organic,” squealed my five-year-old daughter—of grilled vegetables, chicken, and Bratwurst.

Paired with two organic wines (an Albero Spanish rosé and a Bonterra zinfandel), a macaroni-and-cheese dish of organic pipe rigate and a lovely tabbouleh opened most of the guests to the idea of transformation (although my father-in-law took exception to the vegan sausages—“If you put a vegetable in a round thing, it doesn’t make it a sausage”—he should at least be commended for working his way through much of Michael Pollan’s The Ominvore’s Dilemma in advance of the party). After a dessert of my mother-in-law’s organic buttermilk peach pie and organic cookies with vanilla custard, berries, and kiwi, we settled in for the screening.

Unlike Food, Inc., which for all of its vital exposé left many downhearted, Fresh is largely uplifting. For every shot of baby chicks being carelessly tossed to the ground in a conventional chicken factory there are ten shots of fuzzy, clean piglets and healthy cows grazing among wildflowers in organic pastures.

And Fresh benefits from its charismatic heroes. Scenes of Joel Salatin’s bucolic Virginia farm, where Salatin preserves the “cowness” of the cow and the “pigness” of the pig on pastoral grass pastures, made me want to order my own muck boots and roam about with the “egg mobile” (a rickety RV for chickens). Seeing Will Allen, a six-foot-seven former basketball player, run his hands through a box of worm casings on his urban farm in Milwaukee and call it “black gold,” I mentally mapped my backyard for a composting spot.

Other subjects include Russ Kremer, who exterminated his conventional pig herd after a hog gored him with its tusk and he nearly died from the antibiotic-resistant infection he sustained. Kremer now runs Ozark Mountain Pork Coop, which is chock-full of photogenic piglets. The film also features deliciously compelling interviews with food writer Michael Pollan, who sets the tone of the film early by ominously declaring, “Cheap food is an illusion.” His interstitial comments throughout provide credibility, urgency, and charm.

After the credits rolled, we wondered how farms like Salatin’s and Allen’s can be translated to a massive scale and how the shopping paradigm will ever shift back to local markets that feature local goods. What can we do if we can’t afford to shop at “Whole Paycheck”? These are questions to be reconsidered, I suppose, over several more bottles of organic wine.

In the meantime, we were inspired by the film and have begun thinking about “reinvention” in our lives. “I’m not touching worms,” said one guest, “but I would gladly buy my produce from that guy.”

Maybe it’s all about baby steps. Next soirée: worm party.