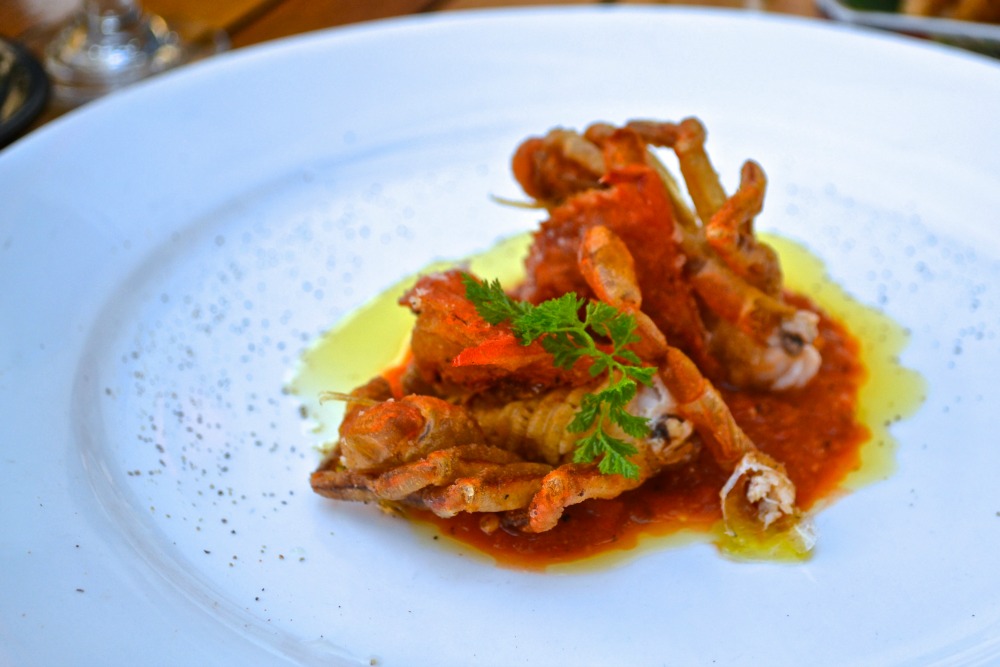 There’s a certain country-hayseed-in-the-big-city vibe to the live soft-shell crab flown in daily from the Chesapeake Bay, which land in a sceney sushi bar on Sunset Boulevard. Although almost anyone can feel inadequate next to the glitterati that regularly reside at Katana Robata & Sushi Bar in West Hollywood, this particular Mid-Atlantic shellfish does manage to fit in among the pimped-out sushi rolls and Kumamoto oyster shooters.

Soft-shell crab season begins around mid-May and goes into September. These months are when the blue crabs experience a growth spurt and need to shed their small, hard shells and form larger, new ones. It is during this molting process when soft-shell crabs are harvested, optimally during a full moon.

The obvious appeal of soft-shell crab is that you can eat the entire crustacean without having to deal with its pesky, tough exoskeleton. That’s not to say that there is no shell at all. There is, it’s just really thin and easier to chew.

Katana’s live soft-shell crab ($16) is just that—alive. Upon dispatching, the crab is gently powdered with Cajun-seasoned potato starch, then fried. A fine salsa of tomatoes, jalapeños, cilantro, onions, and garlic dresses the plate. The spicy crab is fleshy with a flimsy sheath of rice wrapper-like texture.

This is obviously the freshest way to enjoy soft-shell crab season—It doesn’t get much fresher. However, these live soft-shell crabs at Katana are only around with the season, which is why this special treat is limited in availability from now until Labor Day and only on Sundays, from 6:30 p.m. until 11 p.m., during Katana’s Red Sun BBQ. Get ‘em while they’re soft!