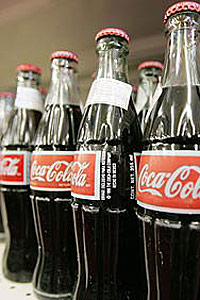 Dinner at The Hungry Cat can be washed down with a Kumquatini or a Greyhound Proper, but if you’re looking for a Diet Coke, you’ll have to BYO. Instead, soda fiends can accompany those tangy oysters and whatever chorizo-addled dish is currently on the menu (it’s mussels at the moment, FYI) with something retro and a lot tastier: sodas that contain cane sugar in lieu of high-fructose corn syrup—usually imported from south of the border.

It would be easy to mistake the dearth of Diet Coke as a pretentious snub of mainstream colas. But after a couple sips of the $4, cinnamon-touched, glass-bottled Coke imported from Mexico, the decision to eschew chemical-filled, corn syrupy sludge becomes clear: It just tastes better. “It might remind you of what Coke tasted like as a kid,” explains Hungry Cat general manager Tim Staehling.

Restaurants all over town are becoming soda purists. At the mid-Wilshire patty joint Umami Burger, they’ve been selling 700 bottles of cane sugar-sweetened sodas a week since opening its doors a month ago. “The reaction has been just unbelievable,” says owner Adam Fleischman. “If people are eating high-end hamburgers, they should be drinking a soda that tastes equally as good.”

Locally, most of these sodas come courtesy of Gardena-based importer/distributor Real Soda in Real Bottles, which also counts Pink’s Hot Dogs, Mozza, Il Sole, and 400 home delivery customers among its growing clientele. The company carries 1,600 varieties of soda, all of which come in the hefty glass bottles that purportedly help to achieve the ideal ratio of flavor to carbonation.

Soda company bigwigs are taking notice of the trend. Next month, Pepsi plans to roll out throwback versions of its namesake cola and Mountain Dew that contain—yep—cane sugar. The limited edition drinks will be available April 20 through June 13. Historically, soda snobs have been known to raid supermarket shelves this time of year for seasonal, “Kosher for Passover” Coke made with real sugar. (Corn syrup is off-limit to observant Jews during the weeklong holiday).

The rest of the year, finding a cane-sugar soda is doable—just head to The Refresher at the Farmer’s Market, Galco’s Soda Pop Shop in Glendale, or to a smattering of bodegas around the city. Since 2007, Jones Soda Co. has been bottling Pure Cane Soda in classic flavors like Root Beer and Cola, as well as kitschier options such as Fufu Berry and Crushed Melon. Whole Foods has also gotten in on the action with its organic house brand of sodas sans corn syrup. But a word of caution for Costco and Sam’s Club shoppers: the “real sugar” colas found at these bulk warehouses sometimes contain a mixture of cane sugar and high-fructose corn syrup, so don’t expect the same flavor you’d get with the Mexican varieties.

As for satiating the calorie-counting masses, the folks at Hungry Cat are still on the lookout for a suitable diet option. “We tried a Diet Coke imported from the Netherlands for a while, but we weren’t crazy about it,” Staehling says. “Usually people are cool with it, and we have one regular customer who brings her own.”