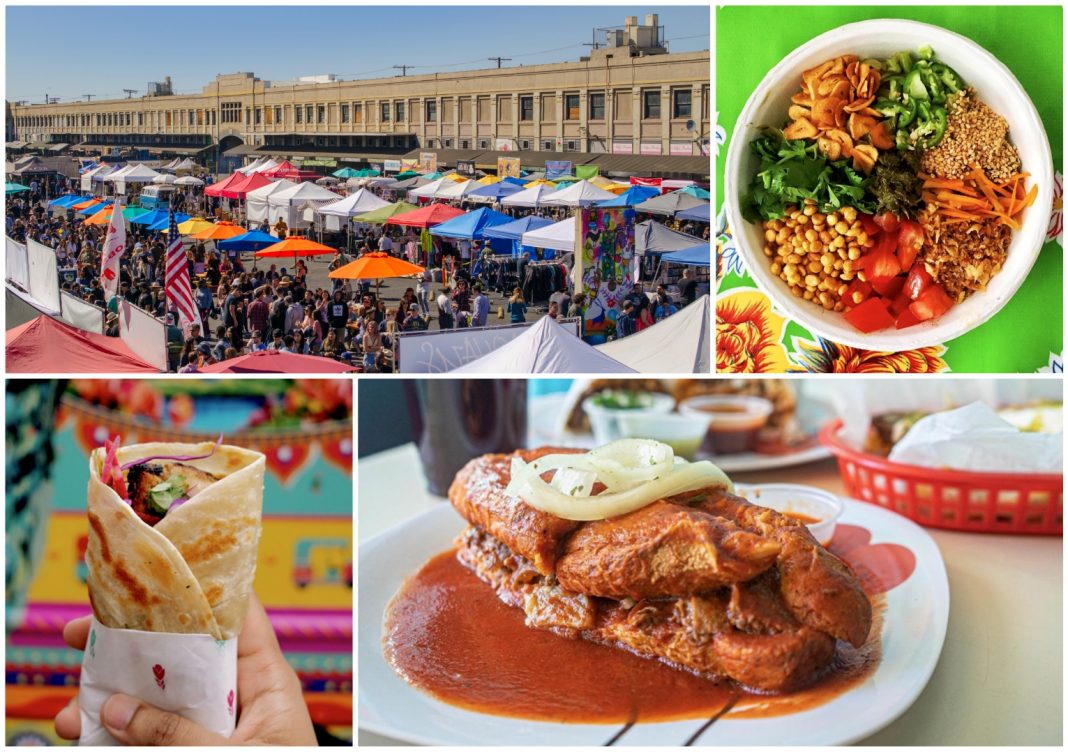 See the full list of vendors below, with their official Smorgasburg bios.

Chinese Laundry – Before becoming one of the breakout stars of the new Highland Park street food scene, Chinese Laundry was one of the original Smorgasburg LA launch vendors.  They make their triumphant return to the market with their brand new roasted duck and the live hand pulled noodle Biang Biang Mian that has made Chef Leo Lamprides the talk of York Blvd.

Dante’s Fried Chicken – Started in 2004 as an underground delivery service in Pre-Hipster Brooklyn, DFC went from green bicycle delivery service to HD-TV cooking show where Chef Dante cooked alongside Theophilous London and M.I.A., to name a few. The word spread and led him on a bicoastal journey to introduce DFC brand to the West Coast as a long defunct food truck called Ride or Fry. Now DFC runs as a delivery only service out of Cassell’s Burgers in Koreatown, but Smorgasburg will be the only place you can get his famous fried chicken tenders, tastes like chicken tofu nuggets and delicious biscuits live and fresh out of the fryer.

Los Cochinitos – Los Cochinitos serves up traditional Michoacan style carnitas made from slowly cooking pork meat in its own lard for four hours. Choose from pork butt, pork skin, stomach, ear, tripe, heart, tongue, kidney, snout and much more as tacos or as a torta ahogada- piled onto a birote and covered in a special tomato sauce and side of homemade spicy salsa.

Mano Po – MANO PO is a new concept brought to you by the creators and founders of Lobsterdamus, featuring a taste of food from their home county the Philippines. Chose between chicken inasal or Manila BBQ chicken, both cooked over mesquite and served with rice and pickled green papaya.

Paratta – Paratta is a modern Desi concept bringing authentic South Asian street food to the masses.  Their signature item features their namesake, a flaky buttery paratta, wrapped around 100% halal meats and vegetable dishes, with flavors from both India and Pakistan.  Started originally as a food track, Paratta will be setting up in a booth for the very first time at Smorgasburg, as they continue their journey towards eventually opening up a brick and mortar restaurant.