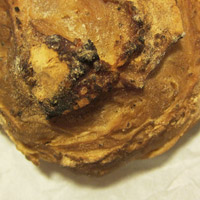 We do it to meat. We do it to fish. Sometimes when we’re drinking we do it to cigarettes. Why not bread? Upstart micro-bakery Smohk (@smohkla), which is dedicated to making dense, chewy rounds of smoked bread, debuted this past weekend.

Founded by Ricardo Carrera-Lowe and Stefan Doomanis, Smohk’s dough is cooked in a specialized combo smoker/oven using mostly oak and hickory wood with a touch of mesquite. The resulting boules feel heavy and look like curling stones. Fortunately, they’re more interesting to watch and taste a hell of a lot better. It’s a tart loaf that’s just a few degrees shy of sourdough with a rich smoky essence concentrated in its crust.

Smohk currently offers only one type of bread, but they’ve nearly perfected a gluten-free wheat recipe and several varieties of marmalade, including one based on Carrera-Lowe’s homemade limoncello, are in the works.

For now, the bread, which costs $9 per loaf, can only be pre-ordered on Smohk’s website during the week and picked up at La Brea housewares store Shelter Half on Sunday afternoon. Smoke ’em if you got ’em.