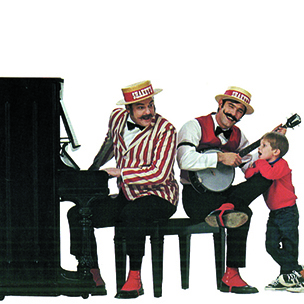 Before Dodger Stadium, before Disneyland, there was Shakey’s Pizza. Sherwood “Shakey” Johnson opened his first store in Sacramento on this day in 1954. The home of Mojo potatoes migrated down the coast, landing in Montclair in 1957. By the late ’60s, more than 300 franchised stores were churning out endless pizzas as costumed musicians played ragtime tunes until midnight. I was surprised to find linguica and smoked oysters on their menu decades before Spago or California Pizza Kitchen introduced such delicacies. Mayor Eric Garcetti has proclaimed today “Shakey’s Pizza Day” and it has been declared that all residents who visit today will be presented with a free giant slice between 3 and 5pm.  In case you were wondering, Shakey’s first location is no longer a Shakey’s. It’s an upscale pub called Clark’s Corner, and yes they do serve pizza.