Home Uncategorized Skip the Tie, Get Pops A Pambazo! 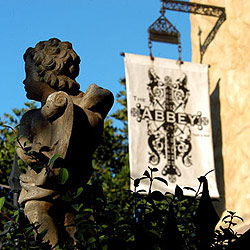 Share
Email
Facebook
Twitter
Pinterest
ReddIt
The Abbey Food and Bar, the legendary West Hollywood gay nightspot, celebrated its 20th anniversary last night. We’re sure it was a great party but we’re more interested in sbe’s announcement that they’re planning to expand the Abbey “brand” nationwide. No specific cities have been named yet, but according to the press release: “Owner David Cooley and sbe are exploring locations where The Abbey’s open-air concept would work best.” Bets on Palm Springs, South Beach—maybe Vegas?

Petrossian is getting in on the Hollywood Bowl picnic action by offering a selection of chef Benjamin Bailly’s caviar-studded dishes to go—and delivered curbside. (‘Cause nothing kills a caviar buzz like having to deal with parking.) Choose among the Caviar Surprise, served in a caviar tin, which features layers of Caviar, King Crab, Crème Fraîche and Apple Cider Jelly ($32); Caviar Dip and Sweet Potato Chips ($14); Blinis with Caviar, Trout, and Salmon Roe; the Green Bean Salad with Burrata, Marcona almonds and Transmontanus Caviar ($18); and the Smoked Salmon Tartine with Goat Cheese, Capers, and Caviar ($16).

The other Wolfgang with a restaurant on Canon is offering a ‘Wine Wednesday’ special throughout the summer. Come humpday at Wolfgang’s Steakhouse, any bottle of wine purchased with an entrée is half off. This applies to every single wine on the list, with prices ranging from $50-$500. It’s hard for us to stomach thinking of a $250 bottle of wine as a steal, but we suppose for a special occasion…

There are two new weekend brunches in town: Culver City’s British-style gastropub Waterloo & City (which, by the way, has the coolest wallpaper—it’s reason enough to go) is serving a full English breakfast with baked beans and all, plus more California-style dishes like a Latke Avocado and Heirloom Tomato Benedict. On Sundays they’ll be offering a British family-style roast for the whole table. Add a Bucks Fizz (British for mimosa) and call it a weekend.

Thomas Keller’s Bouchon bistro premiers its brunch this weekend. What we’re already fantasizing about? The Cotes de Boeuf Hache, braised short rib hash with piquillo peppers, caramelized onion and a sunny-side-up hen egg, and the Boudin Blanc, white sausage with soft scrambled eggs and a house-made croissant finished with beurre noisette. Did we mention house-made morning pastries like the pain au chocolat? Bouchon is simultaneously launching late night hambburgers Thursdays through Saturdays after 9 p.m. The burgers are will be made with “a combination of prime cuts of sirloin, brisket and chuck,” and paired with the bistro’s incredible pommes frites. Sorry Anthony Bourdain, but it looks like the gourmet burger fad is far from over.