Home Food & Drink A Coffee Shop With a Humanitarian Mission Is Coming to the Central... 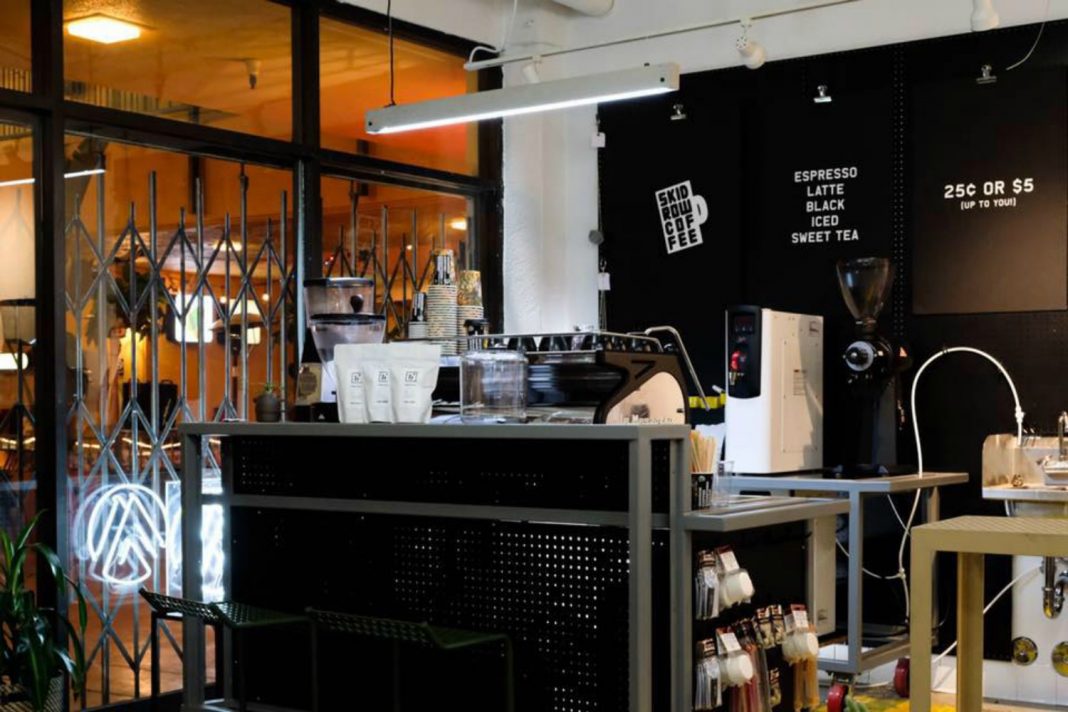 The reasons someone may end up on Skid Row are as varied as the people who inhabit the community. In a city where rents are skyrocketing and major income disparity, it’s easier than people may think to become homeless. But the 50-plus-block downtown L.A. neighborhood is no longer being treated like a lost cause, thanks in part to organizations that are focusing on the people who inhabit Skid Row and what skills they may need to get back on their feet.

Skid Row Coffee was created with the community in mind. Co-founder Danny Park grew up working in his family’s mini-mart, Best Market, on Skid Row. There he got a close-up look at the people and stories that make up the neighborhood. Two years ago he and his partner, Andrew Kang, decided to start Skid Row Coffee as a pop-up that would travel to different parks and events in the Skid Row area, serving drinks that are priced on a sliding scale. They both understood a coffee shop to be a place where community gathers.

Kang, who has a background in coffee, also started teaching free barista courses to people in the neighborhood. Not only was Skid Row Coffee able to teach espresso pulling and latte making, they were also able to create a space of respect and shared values.

In late August or early September Skid Row Coffee will open its first brick-and-mortar location in the courtyard of the Los Angeles Public Library. As Susan Broman, assistant city librarian points out, on the door every Los Angeles Public Library there is a sign that states “We welcome everyone.” Library staff is reportedly thrilled to have a coffee shop and that the new tenant shares their mission of serving the neighborhood.

They plan on hiring two people from Skid Row to work in the cafe along side chef Jessica Nizar, who is creating the menu. The cafe will also offer culinary training and job development for the people of Skid Row. In keeping with their mission of “nourishing the mind body and soul while uplifting the creative spirit,” the menu will feature comfort food staples done with the pleasure of food in mind. According to Park, “Good food is a human right”—and that doesnʼt just mean a hearty meal to fill your stomach. It also means being able to enjoy something that tastes delicious.

Skid Row Coffee is one of many organizations that are working to actively empower the homeless community. The Downtown Womenʼs Center has a cafe and boutique that help homeless women learn skills that will translate to steady employment. Park is inspired by the Los Angeles Community Action Network, an organization that puts the power back in the hands of the Skid Row community.

Besides serving good food and coffee, Park says Skid Row Coffeeʼs most important product is a “transformed human being.”

Correction: This post has been updated to indicate that the opening date has been delayed.

RELATED: The 11 Best Coffee Shops in and Around Highland Park

The Citizens of Skid Row: A View from Inside the Hub of L.A.’s Unhoused Community

‘We’re On It’: L.A. County Makes Its Case for Being Dropped from a Landmark Homelessness Lawsuit

L.A. County Is Appealing an Order That Demands Action on Homelessness