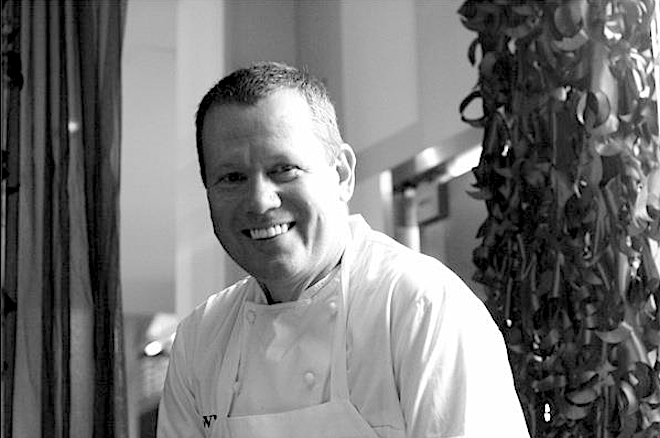 One of L.A.’s most prominent chefs today, Walter Manzke, is sitting at a table inside Sycamore Kitchen on La Brea, down the street from his forthcoming and much anticipated French-inflected restaurant, Republique. He’s wearing what chefs on their off hours wear: jeans, a t-shirt, and Converse. And he’s smiling, because, as anyone who has ever met Manzke knows, he smiles a lot. But who can blame him? He has a lot to smile about.

The multi-starred chef has just finished opening PettyCash, a new taqueria on Beverly Boulevard with restaurateur, Bill Chait. Three months ago, he was in Manila, where, along with his wife Marge, he opened the second of what will be (by the end of 2015) four bakery-cafes called Wildflour. Later this year, Manzke opens Republique (also in partnership with Chait), in the old Campanile space. In many ways, he’s come full circle. And lots of people think they know all there is to know about Walter Manzke—that he’s hospitable and generous, talented and well-trained. But here are six things you probably didn’t know about the chef of the moment.

❶ At home, when they’re hungry after a long day of work, the Manzkes like to riff on a home-style Filipino dish called Adobo. “Basically, we make adobo, which is chicken or pork stewed for a long time. Then we shred the meat and make a simple, garlicky fried rice with that. Then we top it with a fried egg.”

❷ Wildflour, in Manila, was making a “cronut” before anyone in L.A. was selling them. “Marge’s brother brought us some (from New York) to taste, and we just figured we’d try it with our croissant dough. Obviously, everyone is sort of trying to copy Ansel’s creation, but we’re calling it a croissant donut. It’s a lot like a French-style fritter, but suddenly, there’s major worldwide demand for it. We’re selling 1,200 a day, and sometimes as many as 300 an hour.”

❸ Manzke thinks it takes six months for a restaurant to get into its groove. “It’s troublesome if a restaurant hasn’t gotten everything down in six months. By that point, its reputation has been set, and that will make or break the concept.”

❹ The chef is excited about his ovens at Republique. “I ordered two Italian ovens and one bread oven from France. No one else in L.A. has this Italian rotisserie oven. Michael Tusk helped me get in touch with the producers in Tuscany, and I think he was the first chef to bring it to San Francisco. It’s like a fireplace, with a spit. We’re going to do everything in there, I want to do all of our breakfast dishes in there.”

❺ Walter Manzke never invites people into his restaurants when they first open. “I think people should come when they want to come. I don’t even invite my parents in. They come eventually, and hopefully when I’ve worked everything out. But they come on their own time.”

❻ The Manzkes have a son, Nico, who is two. Unsurprisingly, Manzke Jr. likes food. “We went to Chi Spacca for dinner the other night—and by the way? Chad Colby is a major talent. Chi Spacca is maybe the most under-appreciated restaurant in L.A. right now—and there were all of these strong flavors on the table. Stuff like pigs feet and cured meats and steak with radicchio and balsamic … and Nico just kept stuffing it all into his mouth. He goes through phases, and now seems to be the meat phase.”