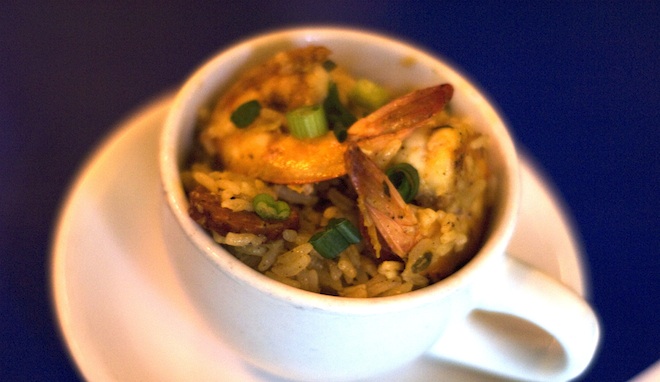 Though most of the country associates jambalaya—a rice-based stew of meats and vegetables—with New Orleans, most sources agree that the dish originated in the Caribbean. With Fat Tuesday right around the corner, we thought it might be fun to uncover a few other facts about one of the most famous dishes of the American South.

The cuisines and culinary practices of France, Spain, Italy, Portugal, and Africa all contributed to modern day Louisiana cookery. Regional differences exist between Cajun and Creole cooking, and each claims their own style of jambalaya, though thousands of variations exist thanks to the dish’s adaptability.

The word jambalaya was not used in reference to a mixture of meats and fish until the early 1800s when it was included in a book of poetry published in Provence. An American publication used the word (“JAM BOLAYA”) in the latter part of that century.

Since 1968, when then Louisiana Governor John J. McKeithen proclaimed it the Jambalaya Capital of the World, Gonzales, Louisiana hosts an annual Jambalaya Festival that includes local competitions, hundreds of recipe variations, and a massive paella-like pot filled with the dish of honor.

According to The Oxford English Dictionary jambalaya comes from the Provençal word jambalaia, meaning a mish mash, or mix-up.

There are many opinions on the origins and meaning of the word. An old wives’ tale, reprinted in John Mariani’s The Dictionary of American Food and Drink offers this suggestion:

Late one evening a traveling gentleman stopped by a New Orleans inn which had little food remaining from the evening meal. The traveler instructed the cook, “Jean, balayez!” or “Jean, sweep something together!” in the local dialect. The guest pronounced the resulting hodge-podge dish as “Jean balayez.”

Here in L.A., Dominick’s and Little Dom’s will be celebrating Mardi Gras all weekend with a NoLa-inspired menu that includes this, chef Brandon Boudet’s recipe for jambalaya.

2. Add bacon and sauté until brown.

4. Add ground pork and season with salt and pepper.

9. Add crushed tomatoes and chicken stock and bring to a boil.

10. Reduce heat and cover with foil and/or lid. Simmer for 20 minutes. Stir once or twice to prevent sticking.

11. Stir in shrimp and adjust seasoning as needed. Liquid should almost be gone.

12. Remove from heat and let cool. Top with green onions when served.