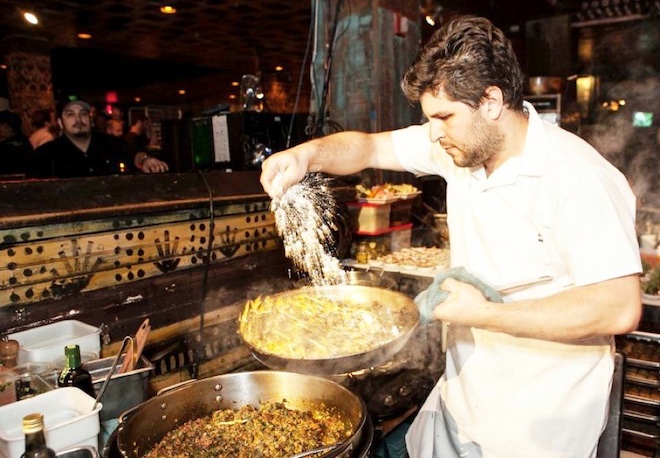 Chad Colby is the chef at chi Spacca in Hancock Park—part of the Mozza empire—but he may be better described as a charcutier, a master of cured meats. In the past few years, Colby has fed his obsession with meat by creating the first ever restaurant program for house-made salumi. Chefs around town have been making their own sausage and salami for years, but Colby has gone further by researching and developing a system that has been certified by the Department of Health and the City of Los Angeles. In a recent Los Angeles Times restaurant review, Jonathan Gold called Colby’s meat program “by far the most ambitious salumi program in Los Angeles.” But there’s more to Colby than his love for Italian food. Here now, six things you may not have known about L.A.’s youngest meat maestro.

1. He’s left-handed. Though cleavers are designed to be held in either hand, knives are often designed for right-handed cooks. Colby has a set of specially designed Japanese knives that fit perfectly in the palm of his left hand.

2. He loves his mother’s potato salad. When asked if there was one thing that she makes that he likes to go home for, he was confident about the potato salad. “It’s got dill, hard boiled eggs, and olives in it, but there’s just something about the texture…”

3. He collects antique pasta tools. A torchio is a kind of press for Venetian bigoli pasta, a sort of thick spaghetti. He has several of these ancient tools, including one from the 1200s that is still in working order.

4. He has a dog named Bruno. The dog is so named because of its brown fur; “bruno” means brunette in Italian.

5. He is constantly working on perfecting a recipe. Right now, he’s working with Nancy Silverton on a recipe for focaccia di Recco, which is a thin bread filled with a creamy cheese found in and around the small town of Recco. The pair have been working on this recipe for a year now, and are getting close to putting it on the menu.

6. He makes fresh pasta at home. Most cooks don’t feel like doing any more cooking when they get off work after a 12-15 hour shift, but Colby just switches gears. He spends all day grilling and curing meat and then goes home to make fresh pasta, his wife’s favorite dish.