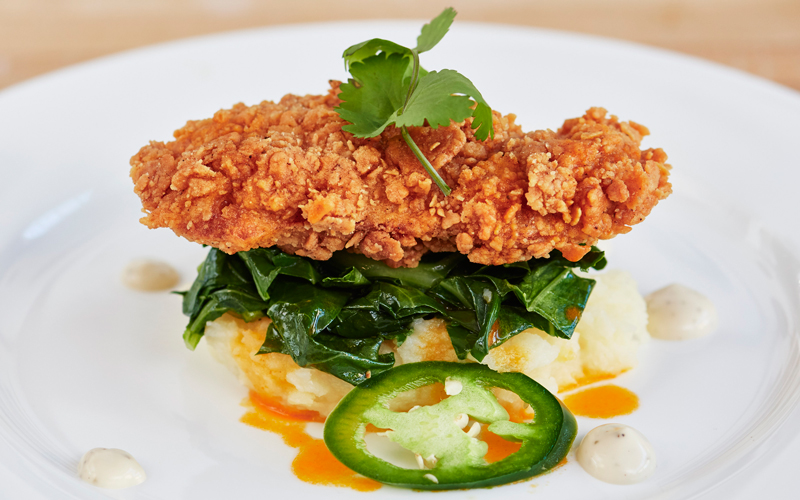 Right when you were thinking genetically modified vegetables that bleed like meat were freaky, a Bay Area startup grows actual petri dish chicken. That’s right, a company called Memphis Meats took some chicken cells and made them reproduce into chicken blobs, and then they took those chicken blobs and fried them. While they were at it, they made some duck meat, too—just for kicks—and they served both meats to taste-testers on Tuesday. It’s the first ever lab-grown poultry, and though it may have turned out more McNuggety in texture than actual chicken breast, the volunteers who tried it were apparently impressed.

Last year, the company produced some meatballs via the same process to moderate fanfare, and they’re hoping to get lab-grown meat products to consumers by 2021. As of now, though, lab-grown “clean meat” is wildly expensive–Memphis Meats says they can create a pound of chicken for less than $9,000 (which, just for comparison, could buy you roughly one ton of chicken from Whole Foods). Memphis Meats plans to scale up and inexpensively grow their meat in giant steel bioreactor tanks in a “brewery” that will be open for public tours.

RELATED: There’s a Veggie Burger That Bleeds Now, and Here’s Where You Can Find It

If you’re weirded out by the idea of eating chicken that wasn’t ripped from the carcass of an actual bird, consider the benefits. The company claims their lab-grown meats will require 90 percent less land and water and 50 percent less energy to produce than meat from actual animals, negating many of the environmental repercussions of raising livestock.

The benefits of eating science meat don’t stop there. Just imagine: When lab-grown chicken is the norm, you won’t have to shield yourself from uncomfortable truths about the brutal conditions on factory farms. You won’t have to accept the fact that sooner or later Salmonella is coming for you. And a century from now when your great great grandchildren inevitably resurrect your consciousness within a computer to berate you for the ethical choices you made in the early 2020s (“You ate animals, you barbarian?”), you’ll at least be able to counter that you jumped on the lab-grown meat bandwagon as soon as reasonably possible.

Thomas Harlander is a staff writer at Los Angeles magazine. You can follow him on Twitter and Instagram. He recently wrote: The Truest Test of Moral Character Is How Thoroughly You Rinse Your Recycling