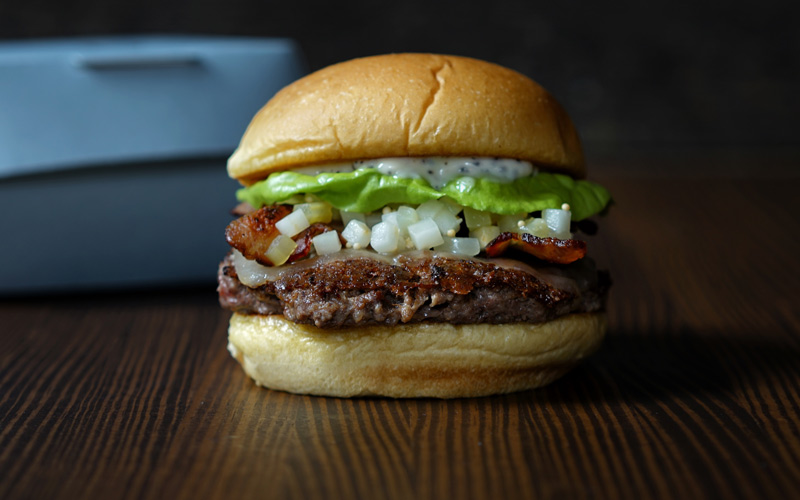 Get out a piece of paper and a Pilot G2 because you’ll want to take some notes. Shake Shack and the NoMad truck are joining forces this weekend to trade burger recipes. It’s like Freaky Friday, but with burgers instead of Lindsay Lohan.

First, Shake Shack will be serving the NoMad-inspired “Humm Burger” (named for, yeah, NoMad chef Daniel Humm), which is “a gruyère cheeseburger topped with applewood smoked bacon, celery relish, Bibb lettuce & truffle mayo.” Any food that involves both truffle mayo and an “e” with an accent over it is a food you should put in your mouth.

Now, here’s where the Freaky Friday analogy breaks down and things start to get a touch surreal.

The NoMad Truck will be serving the “Patty Shack,” which is Shake Shack’s take on NoMad’s own classic chicken burger. Pause. Read that sentence again. Yes, NoMad is serving a version of Shake Shack’s version of NoMad’s version of the chicken burger. Thankfully, you don’t have to fully understand the mechanics of collaborative burger creation to understand that a “black truffle chicken burger with cave-aged Jasper Hill Farm cheddar & gruyère cheese, onion, leek, and ShackSauce” is your top priority for the weekend.

On Friday, March 3rd from 11 a.m. to 3 p.m., the NoMad truck will be parked near the Shake Shack in West Hollywood, with each restaurant dishing out Patty Shacks and Humm Burgers accordingly.

On Saturday, March 4th from 11 a.m. to 3 p.m., the truck will be parked at the Shake Shack in Regular Hollywood, and each will be serving its respective specialty burger.

On Sunday, March 5th 10 a.m. to 4 p.m., the NoMad truck will be Smorgasburg as per yoosj with the “Patty Shack” still on the menu.