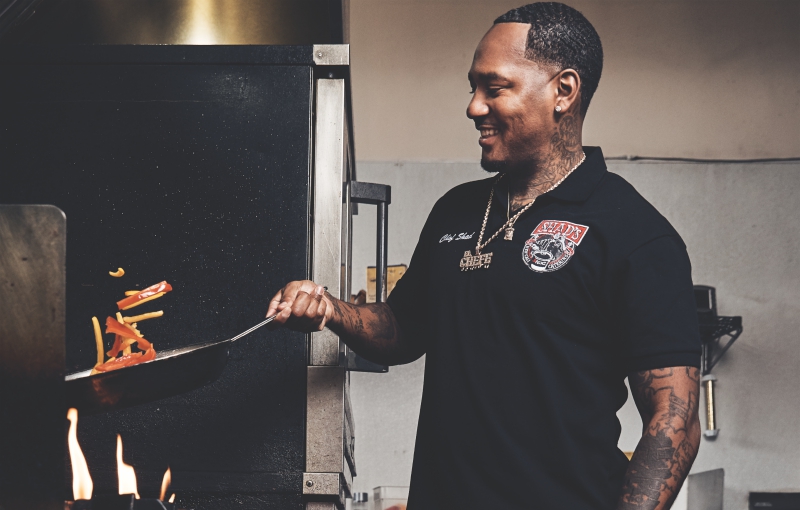 Every Sunday afternoon in an empty parking lot near the terminus of the 91 freeway in Gardena, a handoff goes down. A fleet of delivery drivers shuttles foam containers loaded with four pieces of fried chicken, braised collard greens, and a roll (all for $15) to a legion of customers who reserved their prize earlier that week via social media.

The man doing the cooking, and orchestrating the show, is Michael “Shad” Lawless, founder of Shad’s New Cali Catering. And if you’re wondering why people would go to such lengths to procure a box of Lawless’s Kick’n Cajun Chicken, consider asking one of @ShadsNewCaliCatering’s nearly 32,000 Instagram followers, or local FM personality Big Boy, who once requested a delivery to LAX as his plane touched down. Exceptionally crunchy, ridiculously juicy, and seasoned with the right amount of heat, this chicken is among the best in the city, even if its distribution method is unorthodox.

Lawless launched his catering outfit in 2013, part of a wave of underground chefs in South L.A. selling upgraded home-style dishes advertised on Instagram. In a nod to his family’s New Orleans roots, he originally specialized in gumbo—refined with techniques he picked up attending Le Cordon Bleu in Hollywood and working as a cook at Roy’s downtown—but it didn’t sell during warmer months. His fried chicken, though, made from a secret recipe developed over eight years, exploded in popularity. “I didn’t know it was going to be this big,” says the 32-year-old Compton native. “It’s like going viral with food.”

Before he went to culinary school, Lawless struggled to find his calling. Frustrated after a nine-month stint in jail, he decided to pursue cooking with a monastic intensity. “I was talking recipes with my mom, and it clicked that this was what I was meant to do,” he says. “It was the best decision I ever made.” Having grown up around the corner from Golden Bird, a historic chicken stand that reopened as Honey’s Kettle before calling it quits, Lawless feels like he’s keeping a tradition alive. “Those places were like Compton’s own,” he says. “I wanted to recreate that experience for a new audience.”

Working out of a tiny kitchen, Lawless fries 200 or so pounds of poultry for each run, which often sells out online in less than five minutes. As he ramps up production, he’s focused on developing his brand, complete with boxes bearing his logo: a cartoon chicken doing a midair karate kick. He invites fans to film themselves biting into the chicken’s shaggy orange crust, an act he’s dubbed the #CrunchChallenge. “The skin stays crispy, even overnight,” Lawless says, doubling as his own marketing department. He hopes to have a food truck in operation by year’s end and a brick-and-mortar location soon after. “My goal is for this chicken to become a household name,” he says. “It’s going to become something special for L.A.”

RELATED: Why Los Angeles Fell Head Over Heels for the Fried Chicken Sandwich