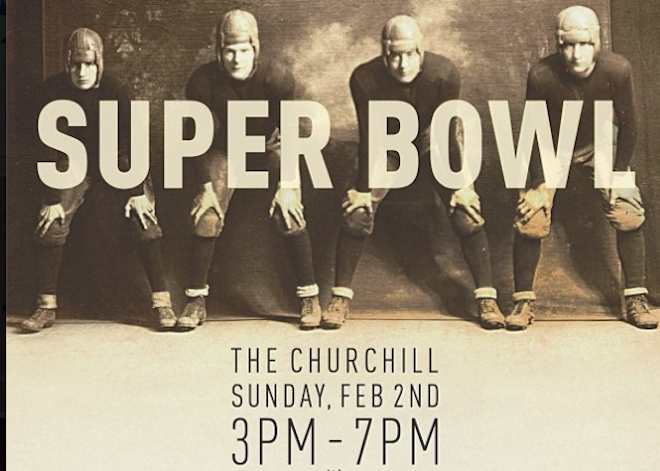 Photograph courtesy of The Churchill

Santa Monica: Watch the big game indoors or outdoors at The Viceroy’s dual Super Bowl viewing events. With a V.I.P. Super Bowl Cabana Package, enjoy a private viewing of the game with your pals, poolside. Alternately, consider the Library Super Bowl Package. Take in the game the cozy way, in a private library viewing room. Packages come equipped with a complimentary bottle of Prosecco, and free game day snacks. Viewing events begin at 2:30 p.m. ($250 to rent the private space, plus a $300 minimum on food and drinks.) » 1819 Ocean Ave., Santa Monica, 310-260-7500, viceroyhotelsandresorts.com/en/santamonica.

West Hollywood: For an all-inclusive experience, join Bludso’s Bar & Que, where $20 gets you unlimited draft beer during the game, or unlimited soda for the designated drivers. They’ll also be offering their full menu, specials on cocktails, and jell-o shots. Bonus: they’ll be raffling off gift cards between quarters. Seatings begin at 2:30 p.m. Reservations are encouraged. The whole Bludso’s menu is also available to-go. » 609 N La Brea Ave, West Hollywood, 323-931-2583, barandque.com.

Beverly Grove: The Churchill’s Super Bowl dine-in or take-out menu includes shishito peppers cooked in duck fat; ceviche-style snapper tacos topped with pico de gallo and lime crema; and barbecue pulled pork sliders. There are six TVs in the indoor/outdoor space, some upstairs and some downstairs near the bar. Specials run from 3 p.m. until the end of the game. » 8384 W 3rd St., West Hollywood, 323-655-8384, the churchill.com

Westlake Village: Executive chef Alexander La Motte of The Bar and Lookout in Westlake Village’s Four Seasons Hote has created a special “football favorites” menu in celebration of the 48th Super Bowl. Check out the WLV wings (jalapeno buffalo wings), cheddarwurst sliders, and chickpea jalapeno puree, with naan bread ($8 each). Craft, draft, and bottled beers go for $4 on game night. Watch from TVs at the bar, or outside at The Lookout terrace, from 10:30 a.m. until 12 a.m. » 2 Dole Dr., Westlake Village, 818-575-3000,  fourseasons.com/westlakevillage.

West Hollywood: Pearl’s and Rock & Reilly’s have teamed up to host a Super Bowl bash on the Strip. Throughout the game, Pearl’s will be serving up sangria and champagne specials on their two-story patio. They’ll also be offering guests a football to toss around during the game.  For those wanting to turn it up a notch, purchase a personal mini-fridge at Rock & Reilly’s, which will transform into a luxury skybox this weekend. Your mini fridge comes fully stocked with chilled Budweiser; snack platters are also available. Doors open at 11 a.m. and don’t close until 2 a.m. » Pearl’s, 8909 W. Sunset Blvd. West Hollywood, 310-360-6800, pearlsliquorbar.com; Rock and Reilly’s, 8911 W. Sunset Blvd., 310-360-1400, rnrpub.com.