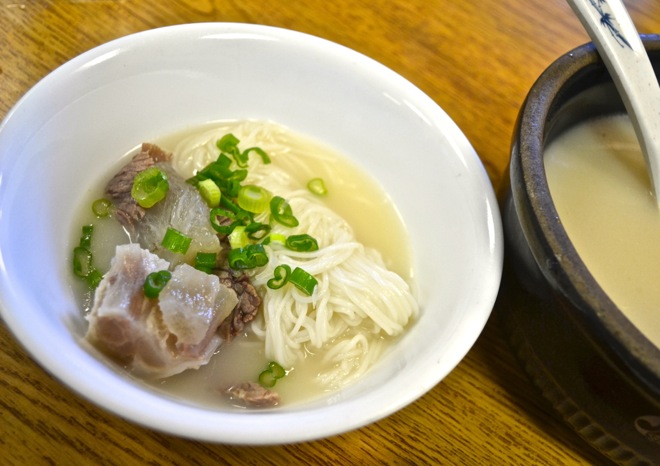 There are a few frosty days in the year that will put a chill deep into your bones even in Los Angeles. Those times beseech something profoundly satisfying, warm, and perhaps, healing to eat and to soothe.

There is a Korean soup that embodies wholesomeness and basic nourishment that literally siphons the very essence from ox bones right into a broth. The soup is called seolleongtang and it is Korean home cooking at its most humble and elemental. The bone soup is cooked perseveringly over the course of several hours and then purified of all fat and sediment, creating a milky broth with the clean, pure expression of bone.

Born of sacrifice and frugality during the Choson dynasty, seolleongtang is the opposite of complex. It is simply water and bone. Traditionally, salt is even skipped, although today you’ll often find salt, black pepper, chopped spring onions, steamed rice, kimchi, and other banchan sides available to burnish the broth.

Seolleongtang at Evergreen Korean Restaurant (known in Korean as “Cho Eun”) elaborates a touch on the relatively stark original, while still staying true to its roots. The collagen-rich broth can be ordered with either tender strips of boiled beef and densely gelatinous tendon, or just tripe, but both will include the thin, white, wheat noodles known as somyun. Since the soup is unseasoned, adding the various banchan like kkakdugi (radish kimchi) or the spicy bean paste spinach is something I’d definitely recommend. To really make it a hearty meal and put some more meat back on your—ahem—bones, dump your side of steamed rice into the clay soup pot and dive in.

Lamentably hidden around the corner from an ostentatious all-you-can-eat Korean BBQ in sleepy Lake Balboa, Evergreen is bashful compared to its rowdy neighbor. Their dining room holds fewer than a dozen plain tables with subdued decorations of framed Korean period prints and some laminated photos of their featured dishes. It’s a generally quiet dining room where any conversation can be listened in on—that is, if you speak Korean—but I submit that this bare bones setting is precisely the kind of place you’d want to visit if looking to reinvigorate your bones with a somewhat bare bones bone soup.