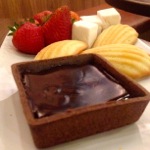 A while back, Starbucks announced plans to quietly unveil a test program—dubbed Starbucks Evenings—in a number of their cafes (including spots Calabasas and Rancho Santa Margarita), expanding the usual coffee and tea menu to include beer and wine alongside some upscale food offerings. While they’re keeping mute on what areas they’re looking in and whether or not more such locations will be added in SoCal, I don’t doubt that more will be coming to L.A.*, and I wanted to check it out for myself to see what was—ahem—brewing.

My dining companion for the evening (I’m sure “Care to be my fancy Starbucks date?” were the words she’s longed to hear her entire life) came armed with her own curiosity. Looking over the food selection, she asked a couple rhetorical questions I hadn’t even really given any thought to: “Do we get wine glasses, or do they serve it in the paper cups? Do they come to our table or do we still go up to the counter?”

Turns out you still go to the counter to order, and the vino is indeed served up in glasses. (Made by Riedel, no less! Classy.) The wine selection was small, but nicely varied, and all were available by the bottle or by the glass. I, taking full advantage of the LAmag expense account, opted for the most expensive glass, JUSTIN Vineyards’ Justification ($15) and my lucky date went for beer, getting a Ballast Point Big Eye IPA ($5). Oh, how nice… they each came with a surprise little side of spiced pumpkin seeds to snack on.

On the food side, we wanted to see what their little convection ovens could crank out, and decided to sample from all over the menu.

I’ve given it a lot of thought since visiting last week. Probably too much thought in fact. Make no mistake: I’m no Marilyn Haggerty getting excited about the new Olive Garden coming to town, but I really did enjoy myself, even if part of the novelty was knowing that all of this was taking place inside of a Starbucks of all places. But—I have to say—I really enjoyed the visit. Was it an unforgettable dining adventure? Certainly not. Would I be so enthralled with the meal had it been at any local wine bar or the like? Probably not. But was it neat to find all of this at a Starbucks and would I go back if it was close to my house? Absolutely.

* A member of the Starbucks media relations team initially told me that the 7101 Yorktown Ave. location in Huntington Beach was also a location offering the beer and wine program, though a call to the store said they hadn’t “started it yet.” Follow-up with the media team yielded: “To amend our previous statement, at this time, our Huntington Beach store is not a Starbucks Evenings location.” Let the speculation begin.