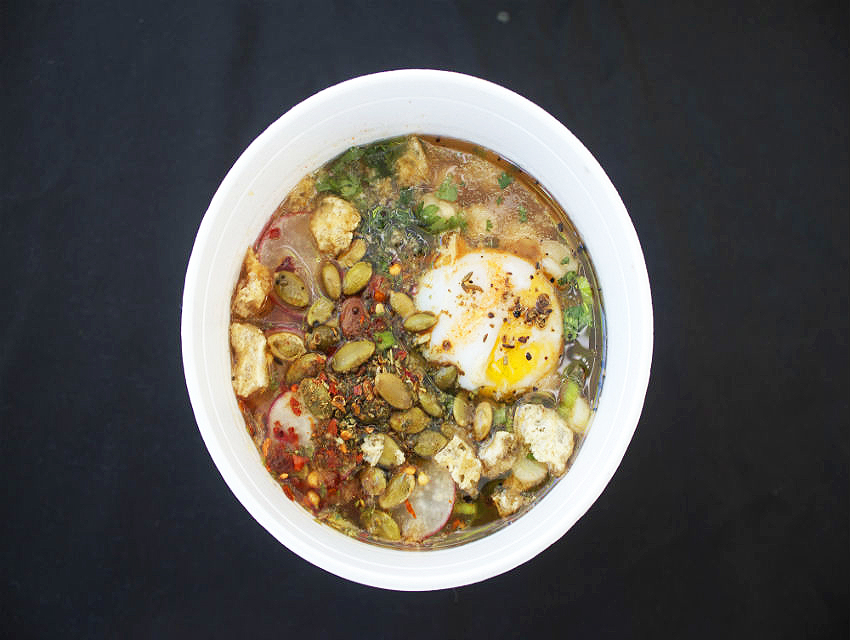 The recurring Sunday food fest known as Smorgasburg LA has finally launched at downtown’s Alameda Produce market. And while fancy toasts, Asian noodles, and Instagram bait (turns out that viral raindrop cake is basically just Jell-O) are what most of the city are flocking for, Smorgasburg also happens to host some of the best Mexican food vendors ever to gather in one place. It’s like a street food crawl through L.A.’s barrios, without any actual crawling. Here are the must-stops: The legendary burrito chain from Zacatecas, and the winner of the L.A.’s 2016 Vendy Cup, is rolling up its dreamy beef birria and tangy chicharrones in the best flour tortillas in the U.S. Ask for a light smear of refried beans for maximum effect.

From the creator of Mexicali Taco Co., and the recently opened Salazar, chef Esdras Ochoa has brought an entirely a new concept to the Sunday food court. Here you can get carne asada, barbecued chicken, or sautéed oyster mushroom tacos on flour tortillas. Or go for a pile of fries smothered in mesquite-grilled meats, avocado salsa, spicy Mexican cream, and pickled onions.

Boyle Heights’ carnitas master, Romulo “el Momo” Acosta is rolling out his cazo (sort of like a giant copper saucepan) each Sunday. Here’s your chance to try L.A.’s best Mexican confit-style pork, made by a 54-year veteran of the trade. Eat here, or grab a pound or two of the sweet, sticky pig to-go for your own ultimate taco party. Pozole, that traditional pork-broth (OK, it’s pork head broth) and hominy soup goes cheffy in the hands of young pocho Ted Montoya. He stews pork and vegan shitake-dashi versions with traditional toppers like chicharrones and less-traditional ones like pumpkin seeds and a 63-degree egg.

The city’s star taquero, Wes Avila, serves his truck’s innovative tacos loaded with restaurant-quality meats (including foie gras), sea urchin, and local produce on tortillas from L.A. institution, Tortilleria La Princesita. The menu changes daily and always features at least one seafood tostada as well as larger dishes like tortas and quesadillas. Bonus: This is the first time you’ve been able to get your Guerrilla fix on a Sunday. When it comes to tortas—especially the regional style here called lonches—it’s all about the roll. So, Primera Taza’s Chuy Tovar brings in his bread straight from the source in Jalisco and stuffs it with lomo (pork loin) or panela (a Mexican cheese), along with fresh veg and Mexican cream.