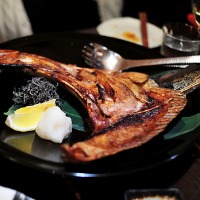 Share
Email
Facebook
Twitter
Pinterest
ReddIt
When warm summer currents begin to circulate off the California coast, migrating waves of tuna aren’t far behind. The massive fish, often more than 50-pounds, head southward from Oregon waters during the summer months.  Yellowtail is a popular item on Los Angeles menus, despite the fish’s inclusion of the Monterey Bay Aquarium’s list of fish to avoid. Like many varieties of wild-caught fish, overharvesting has become a pressing issue, prompting smarter use of our tasty, finned friend. For a growing number of local chefs, a less popular cut—the collar—has found appeal not only in terms of sustainability and cost, but more importantly, taste.

“Yellowtail collars have a lot of great dense, fatty flesh and they’re really succulent,” says chef Vinny Dotolo of Animal and Son of a Gun. “They lend themselves to a lot of different applications of flavors.” The collar is cut from just behind the gills and is typically cooked on the bone, imparting a rich, steak-like flavor. When roasted, the skin achieves a nutty crunch. Fish collars are a common sight on Japanese menus, but until now they’ve remained scarce on Western plates. Recently, the inexpensive cut has gained fans among eco-conscious (and cost conscious) restaurants that source their fish whole.

“Collars for us are a byproduct of the fish we are already using, so it’s utilization of the entire fish at the restaurant,” says Dotolo. “We are respecting the creature by using the whole thing.”

Chef Josef Centeno at Lazy Ox Canteen serves his collar (sourced from whatever fish is on the menu that night) simply grilled alongside an herb-flecked salad of lentils and lima beans. In another Little Tokyo eatery, Izakaya Haru Ulala, hamachi kama (tuna collars) arrive lightly blackened, paired with a lemon wedge, grated radish and a bowl of salty cured seaweed. At Son of a Gun, the cut is a frequent daily special, where the chefs encourage diners to bite into the collar as they would a pork rib.

To cook tuna collar at home, check out Seafood City or Fish King in Glendale, or one of L.A.’s Japanese markets such as Marukai, Mitsuwa, or Nijiya. The rule of thumb is the larger the fish, the richer the collar. For best results, grill or broil over high heat, ensuring the outer skin develops an even char. As with any fresh fish, a little olive oil, salt, pepper, and lemon are perfectly apt companions.