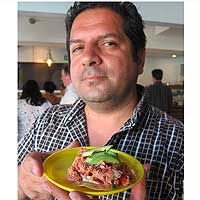 It’s no secret that we are fans of local Latin-food blogger Bill Esparza here at the mag. The Los Angeles contributor and “reverse coyote,” as he has dubbed himself, took me on a 48-hour citywide taco crawl and showed us the ins and outs of La Valle de Guadalupe—aka our next weekend getaway. The professional saxophonist by day, taco destroyer and all around party animal by night has also moonlighted as a sort of “fixer” for several TV shows, pointing producers in the right direction for the most authentic Mexican food on both sides of the border.

Tonight, Esparza gets some on-camera love alongside recent James Beard Award-winner Andrew Zimmern for the host’s Travel Channel show, Bizarre Foods. The episode, which airs at 9/8 Central, follows the pair as they cruise around San Diego grubbing on Esparza’s favorite foods in the city—and no doubt inspire us to head south as soon as possible. Among the stops are Tortas Ahogadas el Gallito and Aqui es Texcoco, both in Chula Vista.

We’ll ge making tacos tonight in his honor. That flask of mescal? Oh, that’s for him too. He knows why.

Check out this sneak peek, where Bill and Andrew hit up some backyard barbacoa.