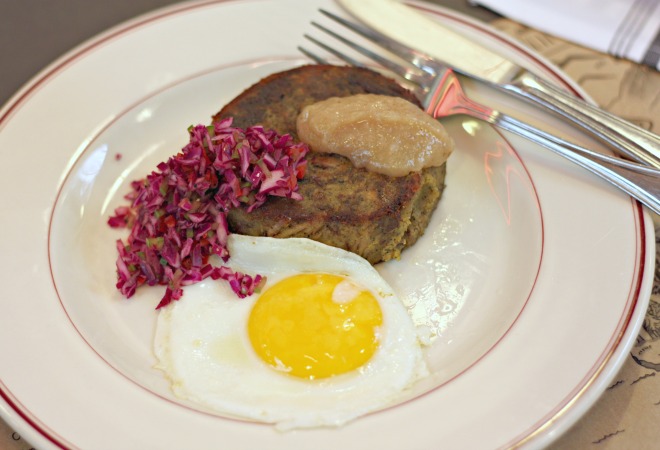 When most people think of weekend brunch, they think of pancakes and mimosas. Scrapple? Not so common.

If you’re familiar with scrapple, a rough mush of meat made from cornmeal-thickened beef and pork trimmings whose roots trace back to 18th-century Dutch Pennsylvania, you probably have an opinion on it. Some crave it; others despise it. It has been dubbed “Philly Paté” and “Amish Spam.” It’s unclear whether these are intended as compliments or insults. And, like many regional American foods born out of hardscrabble times, it’s becoming increasingly hard to find. But not at the Belcampo Meat Co. storefront in Grand Central Market, where head chef Robbie Arnold-Starr cuts of thick rounds of homemade scrapple and griddles them crisp and crunchy, then serves them with a sunny-side-up egg, a dollop of pear compote and a colorful pepper and cabbage slaw ($11).

Granted, the idea of scrapple fits well within the whole-animal butchery practices at Belcampo, a vertically-integrated outfit that raises all of its own livestock on a large farm in Northern California. Arnold-Starr admits that the idea of utilizing beef, pork and lamb trimmings (all three are used in the Belcampo scrapple) may turn some customers off, but since all butchery is done in-house, the trimmings end up containing some very fine cuts. “I think there is even a little ribeye in this batch,” says Arnold-Starr.

Of course, if crispy meat-trimming goodness doesn’t sound like your bag, perhaps the other dishes–all made with humanely-raised, sustainably farmed meat–will heat your griddle: ★ Pork shoulder cochinita pibil, stewed with achiote chile and lime, topped with marinated onion and habanero, avocado and an egg ($11)

Weekend brunch at Belcampo Meat Company in Grand Central Market be available from 10 a.m. to 1 p.m. every Saturday and Sunday, starting on May 10.  According to manager Jered Standing, Belcampo hopes to have their alcohol license in place next weekend and will pour mimosas and micheladas.