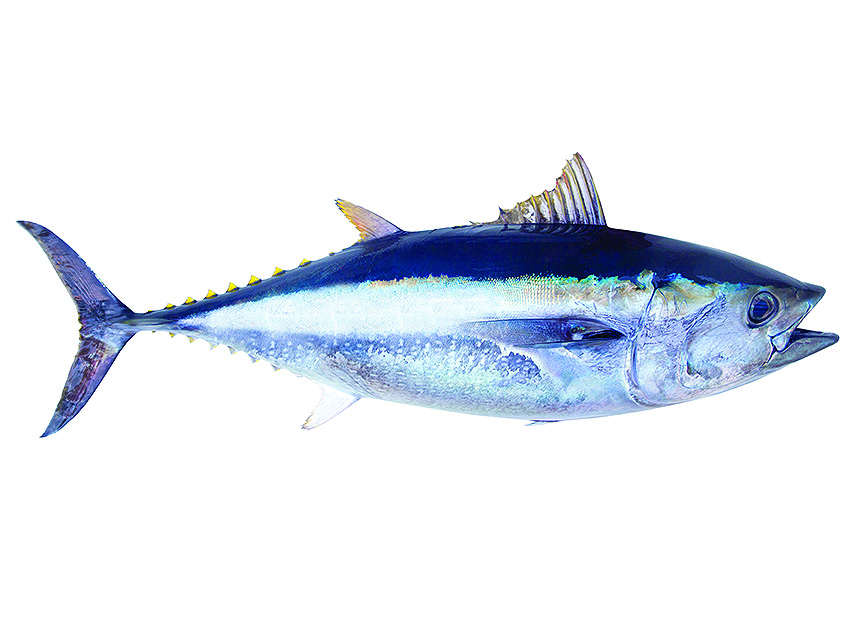 SALMON
Japanese name: Sake
Description: The king salmon is the most sought-after member of a family that famously spawns in freshwater but spends the bulk of its life in the Pacific. Also common in restaurants is the Atlantic salmon, which is more closely related to a char and has a troutlike appearance. That’s Finny: Worn out by its trek upriver, the Pacific salmon dies right after breeding. The Atlantic salmon, on the other hand, survives to spawn another year. BLUEFIN TUNA
Japanese name: Maguro
Description: More fatty than its close relative the yellowfin, this tuna can reach hundreds of pounds. The Atlantic and Mediterranean bluefin are particularly coveted, for which they have paid dearly. The bluefin is forever on the move because it can only breathe by forcing water over its gills; held still, it drowns. That’s Finny: Bluefin jump in and out of the water, some speculate, just for the thrill of it and are known as the “leaping tuna.” ALBACORE
Japanese name: Shiro Maguro
Sustainability: U.S., Canadian Pacific
Description: Its Japanese name translates as “white tuna,” which it is. Cruising from its birthplace north of the Philippines to our coast, the albacore hangs out for a few years and then returns home. It has recently taken off as a sushi offering, likely because of the bluefin shortage. That’s Finny: The fins fold into grooves in its body, making it capable of bursts of speed up to 50 mph. YELLOWTAIL
Japanese name: Hamachi, kanpachi, hiramasa
Description: Yellowtail are members of the jack family, starting with the melt-in-your-mouth hamachi (Japanese amberjack), followed by the only slightly less buttery kanpachi (alma-co jack), and finishing with the still-succulent hiramasa (California yellowtail). Yellowtail is the fattiest of the whitefish commonly used for sushi. That’s Finny: California yellowtail are the border collies of the ocean. They herd mackerel into the mouths of their waiting mates and, as they school, bump blue sharks out of the way. MACKEREL
Japanese name: Saba
Description: The Atlantic mackerel is favored for its fat content. Mackerel must be put on ice immediately, as their flesh decomposes quickly. The Pacific mackerel coming from Japan are handled impeccably, in contrast to those caught here, which are dumped into the boat’s hold. That’s Finny: A judge who studied ichthyology at Stanford University once said he got his “best training for the law from a study of the mackerel tribe,” no doubt a reference to the fact they are voracious predators. EEL
Japanese name: Unagi
Description: Anguillid eels live in rivers and return to the ocean to spawn, a reverse of the salmon experience. They make deep descents to breed; the larvae float to the surface, where they feast on particles known as marine snow until they’re large enough to head upriver. Their wild populations have been slammed because of pollution and the large number taken for farming. That’s Finny: Eels swim using a sine-wave, or S-shaped, motion. While they look smooth, they actually have scales embedded in their skin.