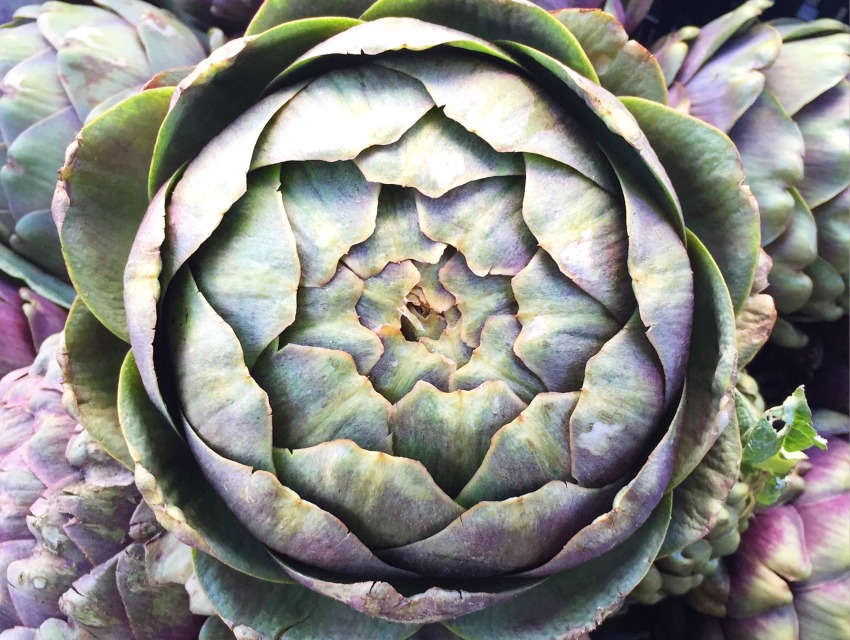 You can’t talk about artichokes without talking about Italy. The exotic flower (yes, it’s in the daisy family) first reared its thistles in Renaissance paintings in the 16th century. Caravaggio famously threw a plate of fried chokes in a waiter’s face at the Del Moro restaurant in Rome. Even Pliny the Elder wrote about a spiky vegetable, although many believe he was referring to the artichoke’s ancestor, the wild cardoon.

Come spring, Venetians look forward to castraure (“castrated ones”), in which young buds are snipped from the center stalk when they are as small as a quarter. They are exceptionally tender and can be eaten raw with a squeeze of lemon.

In Rome, March means carciofi alla giudia, fried artichokes named after the Jewish ghetto where the dish first appeared. This is the method du jour at Bucato in Culver City where chef-owner Evan Funke oil-braises small purple anzio artichokes from Life’s a Choke before frying them to potato-chip consistency. The dish is brightened with bagna cauda, mint, and lemon juice.

Before frying, Funke takes a paring knife to the pointed tip of the anzios and pulls off any tough outer leaves. Honoring Italian tradition, and the new trend of stem-to-root cooking, he then gathers the trimmings and feeds them through a meat grinder. The mush of leaves is sautéed slowly with onion, carrot, celery, and herbs for a basic sofrito. Stock and tomatoes are added before simmering the mixture for several hours. The result is an artichoke sugo that can be used atop bruschetta, pasta, or a piece of beef.

At Gracias Madre in West Hollywood, bar manager Jason Eisner follows another Italian tradition by making his own artichoke liqueur. While most bartenders would reach for a bottle of Cynar, Eisner mixes organic txakolina and organic cognac with artichoke leaves, chamomile, cloves, wormwood, and agave. The process is not for the impatient. The infusion takes at least two weeks to mature, and, Eisner says, “Like me, it gets better with age.”

Right now at the bar, the liqueur provides the aromatics for the El Mero Mero. “It’s as if a Negroni, an Old Fashioned, and a Manhattan had a ménage a trois and this is their love child,” Eisner says. Flavor aside, artichoke tonics have long been said to protect the liver and lower cholesterol levels, so why not pour it over ice and toast to your health?