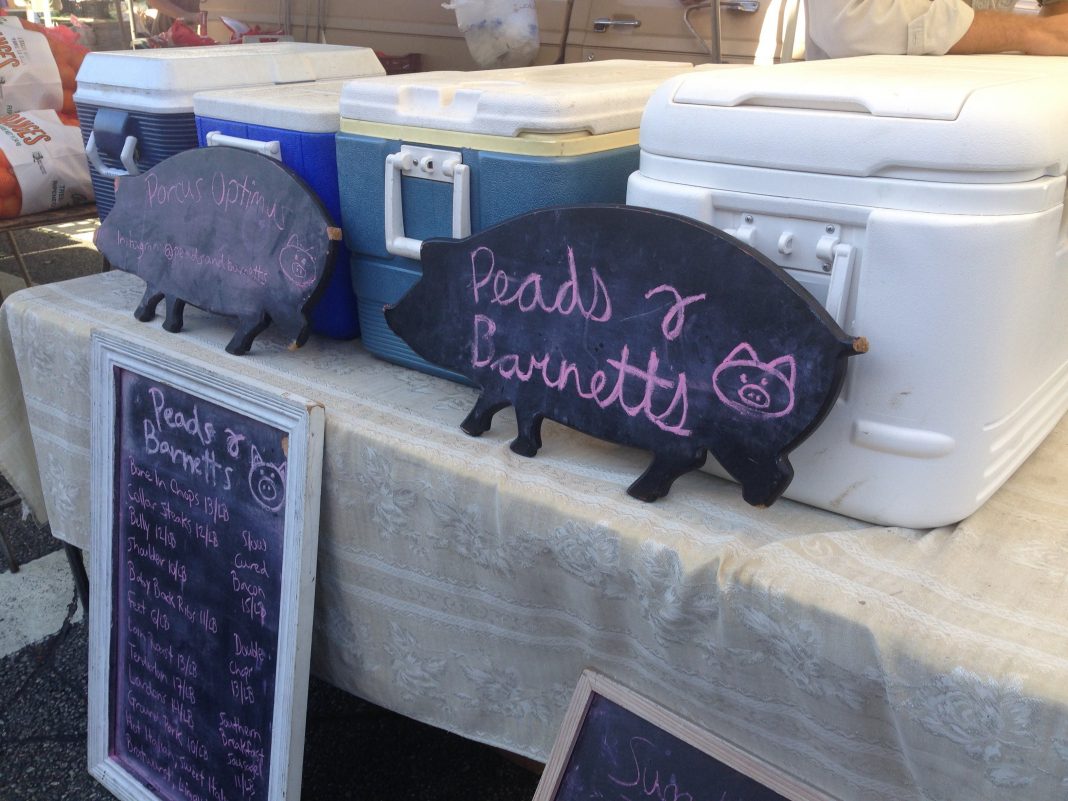 KCRW Good Food Producer Gillian Ferguson shares highlights from farmers’ markets around Los Angeles, along with tips from chefs and growers on how to best use what’s in your basket.

It was fate that led Oliver Woolley to pigs.

“I was told my whole life not to get into the business,” he tells me. Yet every Wednesday, there’s Oliver behind two coolers, peddling pork at the Santa Monica Farmers’ Market. A chalkboard sign, precariously propped up against the leg of his card table, lists the daily offerings: bone-in chops, collar steaks, belly and so on.

By 9am, it’s not uncommon to find Sqirl’s Jessica Koslow and Gjelina’s Judy Babis patiently waiting their turn as Oliver charms another curious market shopper into buying a pound of slow cured bacon. His heritage breed pigs, a cross between the ultra-fatty Mangalitsa and the UK native Middle White, are raised in both San Diego and Colorado, where Oliver cut his teeth in the pork industry as teenager, bailing hay for his father’s pig operation on the state’s high plains.

The story of Peads and Barnetts—the name of Oliver Wooley’s company—dates back to his grandfather who attended school for animal husbandry and genetics in postwar Britain. “At that point,” says Oliver, “it was a very new idea to focus on cross breeding to get better production or better meat quality. It was right after World War II and people’s taste was changing.” His grandfather saw the tides shift and launched the Pig Improvement Company (PIC), which is now the biggest pig genetics company in the world. “They did a lot of good things and they really pushed the industry forward and pushed for good things, but in a big way he was responsible for making pork the other white meat—tasteless, no fat and no flavor—which I don’t like.”

In the late 1980’s, Oliver’s father moved him, along with his brother and his mom, to Colorado where he took the family business in a new direction. “He used to clash with my grandpa on ideals and how things should be done, he remembers. “My dad wanted to do his own operation and everything outdoors..breeding and raising the pigs and then selling them when they are at market weight.” It wasn’t until his father met a gentleman by the name of Bill Niman, that he realized that there was a market for naturally raised, pastured pork. “My dad was definitely a pioneer, I don’t think he’d admit that, but looking back it was crazy what he was doing…at that time it was still ten to fifteen years ahead of what consumers wanted. Nobody really knew that it was something special.”

Oliver’s own path was circuitous, with brief forays in finance and cooking school, but it was a flavor revelation that led him back to raising pork. He says, “one of the real things that changed my perspective was eating a cut called secreto in Spain which they get from the Iberico pigs, you know the black-footed pigs. It’s a tiny cut —you get about two pounds maximum off of the pigs but it’s an incredible thing.” Oliver’s interest in unique butchering cuts from Europe, Japan, and South America helps to set him apart from his competitors. “I just don’t understand why American butchers just hack it up with a saw and don’t put really any focus at all on all these little muscles that are in an animal that are so good,” he says. “When you hack it up you lose everything that’s special.”

At Wednesday’s market you can find his unique collar cuts and the jowl, which is called pork toro in Japan. For Oliver, this is at the heart of his operation. “I really enjoy sort of showing people new things, that’s my favorite thing about this whole project. More than anything else that’s why I’m doing it.”

People Are Panicking About a Potential Pork Crisis in California