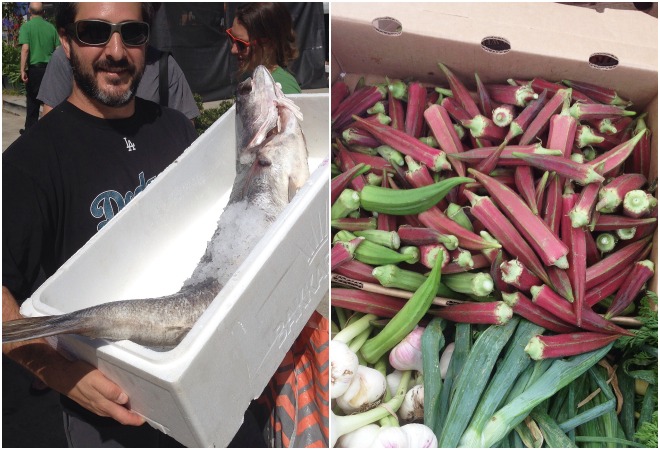 KCRW Good Food Producer Gillian Ferguson shares highlights from farmers’ markets around Los Angeles, along with tips from chefs and growers on how to best use what’s in your basket.

While backyard kale and rooftop herbs are de rigueur, local seafood is floundering in comparison, partly because it’s hard to find; but two recent additions to local farmers markets are bringing California-caught fish and shellfish directly to consumers. Captain Ben Hyman, who helms the Always Grinding, fishes hook and line for wild California king salmon, opah and white sea bass. After a long day at sea and a few hours sleep, the Santa Barbara-based fisherman then peddles his fish at a handful of L.A. markets. Community Seafood, also based in Santa Barbara, follows the CSA model offering customers a flexible subscription to a local and sustainable catch that changes weekly.

Chef Bruce Kalman of Union in Pasadena was an early adopter, purchasing whole fish from Captain Hyman on Saturdays at the Santa Monica Pico Farmers’ Market. He serves fresh salmon belly raw on pink Himalayan salt blocks, garnished with olive puree, pickled purslane and bottarga. Kalman says, “You barely have to cook the fillets,” which he pairs with haricot vert, preserved kumquats and bagna cauda. What’s the chef’s advice for home cooks? “Just buy it!”

Conquer the Slime
Mucilaginous is not a word often associated with deliciousness, but that is exactly how Chef Miles Thompson described the bundles of Vietnamese spinach tucked in his cart at Wednesday’s Santa Monica Farmers’ Market. Sometimes called Malabar spinach, the long stalks are plump with vibrant green foliage and demure flowers. Until Saturday, you can find Thompson delicately tweezering the small leaves and blossoms on top of summer squash and white corn fondue at the beloved and nearly gone Allumette.

Speaking of mucilage, okra is rearing it’s notoriously slimy head all over town. At Allumette, Thompson salts okra seeds before marinating them in mustard oil. While he admits it doesn’t negate the slime factor, the result is a trompe l’oeil that looks like pickled mustard seeds but tastes like salty caviar. At The Ladies Gunboat Society, Chef Brian Dunsmoor gives his okra a Southern accent, serving it fried with pickled shrimp salad, buttermilk dressing and chow-chow relish. Frying okra, Dunsmoor says, balances both the sliminess and the texture.