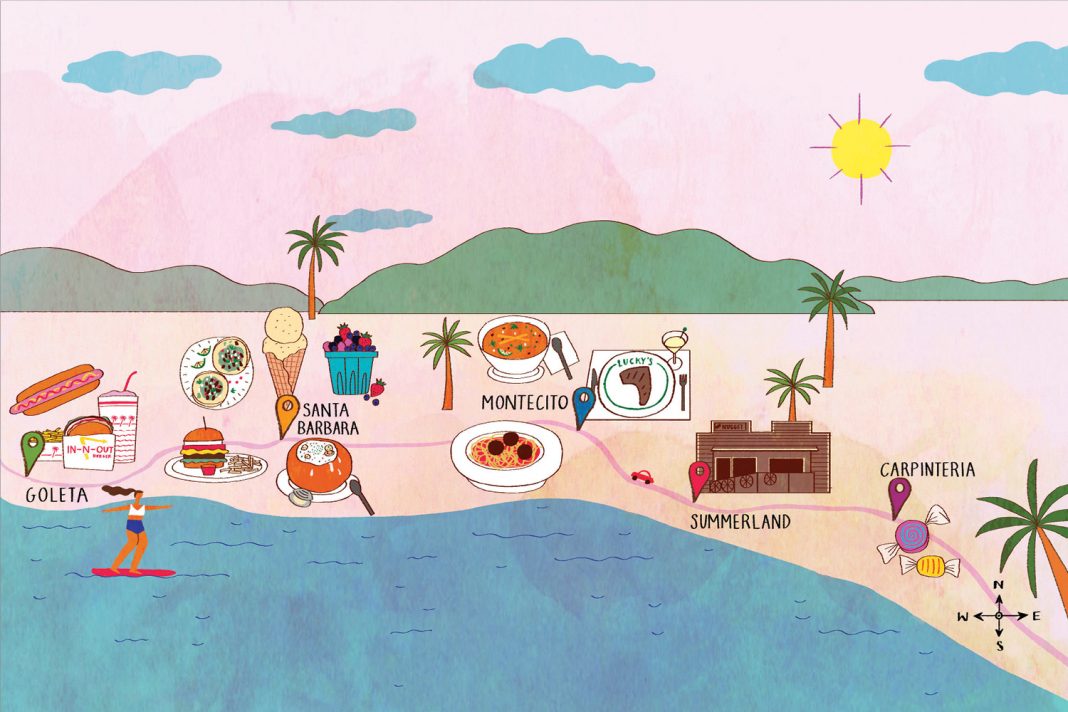 Julia Child might be best known for bringing French cooking to the masses, but she was a California girl at heart.

Born and raised in Pasadena, the legendary gourmand often summered along the California coast. In her later years she lived in Montecito before passing away in 2004.

“Santa Barbara spoke to her,” says Eric Spivey, chairman of the Julia Child Foundation for Gastronomy and Culinary Arts and a longtime friend. This year the foundation is a partner in the first Santa Barbara Culinary Experience: The three-day event, March 13 to 15, will feature dozens of meals, cooking classes, and festivities.

Can’t make it? You can still get a taste of Child’s love for the area with this map of her favorite places to eat. “She just never stopped being interested in meeting people, knowing people, doing things,” says Spivey, who regularly took the culinary icon to eat around Santa Barbara County toward the end of her life. “She was just a joy.”

“She was someone that enjoyed a good meal, [and it] didn’t have to be expensive or fancy,” says Spivey. “She really thought the Costco hot dogs were good.” 7095 Market Place Dr., Goleta.

Another humble favorite of the gourmand, who typically ordered a double cheeseburger, fries, and a milkshake. Spivey says: “She really felt like the quality of the In-N-Out burger was quite high versus McDonald’s.” 4865 Calle Real, Goleta (and other locations).

Julia made this taco joint famous when she covered it on Good Morning America in the 1980s. Whenever she went, they would treat her like a queen and bring out a number of dishes—from tacos to enchiladas—though Mexican fare wasn’t always her favorite. “There are certain ingredients of Mexican food that she didn’t like,” says Spivey. “Interestingly enough, she didn’t really savor cilantro.” 622 N. Milpas St., Santa Barbara; 805-963-4940.

“She had a bit of a sweet tooth,” says Spivey. At the original location of this beloved scoop purveyor, which now has outlets throughout Southern California, she tended to order vanilla with various toppings. But, Spivey adds, “I think she liked almost any flavor.” 728 State St., Santa Barbara.

It was “a ritual for her,” says Spivey. Even in her later years, when Julia was cooking fairly infrequently, she would go every Saturday. “She had certain vendors that she would go and speak with,” says Spivey, who notes that berries were one of her favorites. 119 E. Cota St., Santa Barbara.

Julia loved to get a burger from this decades-old restaurant. Spivey recalls how, when she was recovering from surgery, the then-owner of the café took a burger to her in the hospital. 702 Anacapa St., Santa Barbara.

The famed chef would pick up fresh fish from this spot at the end of the wharf. She also loved its chowder. 230 Stearns Wharf, Santa Barbara.

“It’s a classic steak house,” says Spivey. “She loved a great prime rib or a rib eye … [as
well as] a good martini or a glass of red wine.” 1279 Coast Village Rd., Montecito.

“It’s kind of a saloon. …Nothing fancy—good hamburgers and cocktails—and she would go there and just really have fun,” says Spivey, who notes that Ronald Reagan was also a fan. 2318 Lillie Ave., Summerland.

RELATED: 47 Perfect Weekend Getaways In and Around L.A.