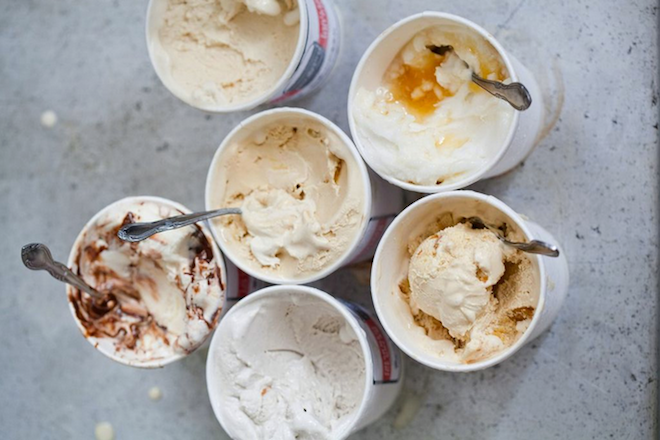 We’re deep into August, the dog days of ice cream consumption for all intents and purposes. But today comes big expansion news for Portland-based ice cream sensation, Salt & Straw. The company, which already has one busy scoop shop on Larchmont, will be opening two more locations in the coming months. The first will be a 1,035 square-foot space on Abbot Kinney in the former home of CasaLinda Mexican, which is set to open before summer’s end. Early next year the creamery will open a 2,300 square-foot outpost in the Abbot Kinney of the Eastside, the Arts District. For those who can’t wait for next year’s downtown debut, starting this Friday there will be a Salt & Straw ice cream truck (how novel) parked outside its future Arts District home on East 3rd Street from noon to 10 p.m. daily.

“I’m still in awe of the incredible wealth of raw ingredients that are available in Southern California,” says creative director Tyler Malek in a statement. Malek co-founded Portland’s Salt & Straw with his cousin Kim in 2011, and the pair opened their first L.A. store on Larchmont in 2014. “It’s truly an abundance of riches, and I’m constantly finding fresh inspiration from walking the markets, dining at local restaurants, and meeting with area chefs and artisans who are similarly passionate about honoring the products with which they work.”

Salt & Straw may be a transplant, but the company has collaborated with local luminaries—from Roy Choi to Compartes chocolatier to Guelaguetza—on a line of L.A.-inspired flavors, and all the products are churned locally in the company’s Boyle Heights facility. Just in case your locavore streak was the only thing keeping you from that cone of Almond Brittle with Salted Ganache.