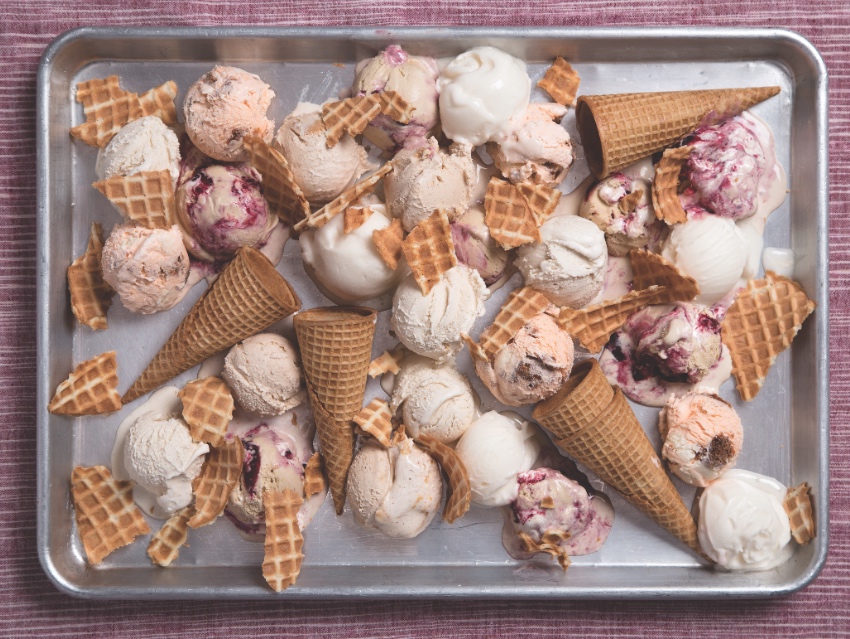 There’s a thin line between genius and just plain crazy, and Tyler Malek, creative director of artisanal ice cream maker Salt & Straw, hews that line like a tightrope walker. From now until July 2, you can literally taste his mad genius at Salt & Straw’s Larchmont Village scoop shop, where Malek has teamed up with some of L.A.’s biggest chefs to create the L.A. Street Food Series. Wurstküche, Border Grill, and the King of Street Food himself, Roy Choi, are just a few of the names to sign on to this delicious experiment, and they’re pushing the boundaries of ice cream decency with flavors like Green Corn Tamale, Korean Fluffernutter, and even the world’s first bratwurst and mustard ice cream. Yes, it tastes just as weird as it sounds.

Five flavors round out the L.A. version of the series (Salt & Straw is also running separate flavors in their native Portland) and only one sits anywhere close to what you’d expect out of mainstream ice cream. Papi’s Korean Fluffernutter comes from Choi and plays on the boiled peanuts the Kogi impresario loved as a kid. To translate it into ice cream, Malek makes a creamy peanut-butter base then mixes in a swirl of marshmallow and blackberry jam. To complete the process, he studs the whole thing with those beloved boiled peanut. The result is a PB&J-esque beauty that’s definitely going to leave blackberry seeds in your teeth.

Traditional Oaxacan molés are composed of an incredible number of ingredients that create intense flavorful harmony. For his Molé Rojo Flan flavor, Malek partnered with the Oaxacan experts at Guelaguetza to make an ice cream that somehow manages to be both soothing and extremely complex, thanks to the restaurant’s classic molé rojo recipe. The dominant flavor here is cinnamon, but hints of spicy ancho chile and rich Mexican vanilla hit your palate, too. Add in the egg flan, and you’ve got a summertime treat that can best be described as “flan-tastic.” Malek says he loved working with the Lopez family of Guelaguetza to make this flavor come to life because their restaurant is brimming with the family’s vibrant energy.

“As soon as you go into their restaurant. you are hit with a sudden rush of fun,” says the ice cream maker. “Your body is overrun with the urge to dance, and the family-owned restaurant becomes one of the happiest places in the city!”

While the Green Corn Tamale flavor from the Border Grill team of Mary Sue Milliken and Susan Feniger may seem somewhat weird, there are two other flavors that definitely register much higher on the strange scale. The Peking Duck Buns attempts to turn the sweet/savory San Gabriel Valley treat into a beach snack, but after a few bites (and a mouthful of odd cucumber gummies), the novelty wears off. The Bratwurst and Mustard flavor from Wurstküche is sure to commandeer the curious, but after tasting it, we can say that we much prefer the original non-frozen interpretation—it’s just hard to get past an ice cream made with bratwurst drippings and a honey-mustard swirl.

These outrageous flavors are yours at the Larchmont store until July 2nd, with single scoops running $4.25, doubles at $6.25, and full pints setting you back $9.50. If street food isn’t your thing, they’ll be offering a berry series in July and a vegetable series in August with an ultra-refreshing 1000 Herb Sherbet that may not be made with 1000 herbs, exactly, but could easily become the best palate cleanser you’ve ever tasted.