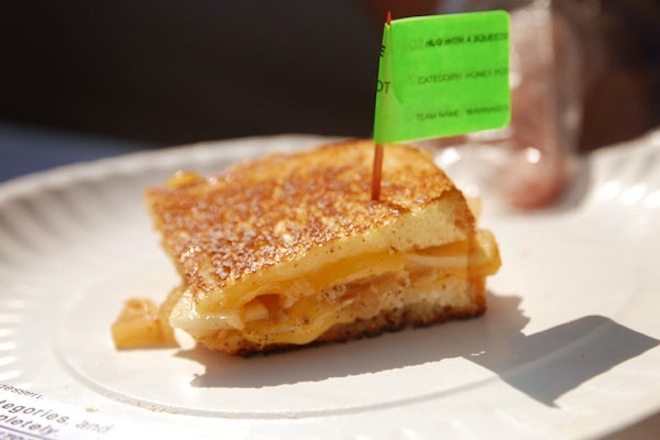 Tim Walker stopped the world—or at least Los Angeles—to melt with us, but all good cheesy things come to an end. This morning, the owner, operator, and instigator behind the country’s biggest festival in honor of the grilled cheese sandwich—The Grilled Cheese Invitational—announced that this year’s fest would be its last. In a surprising post on the company’s facebook page, the fez-wearing Walker announced that the event set to take place on National Grilled Cheese Day, April 12, 2014 at Los Angeles Center Studios in downtown Los Angeles will be the festival’s final celebration of grilled cheese. But why?

“It’s because we won the war on curds and whey,” Walker says. “There are national restaurant chains dedicated to grilled cheese. There’s a motorcade of grilled cheese trucks around the country. When we started this, grilled cheese was on the kids’ menu and the only people doing events with it were us and Campanile. Now, it’s taken its rightful place in the forefront of American sandwiches. We’ve done our hard work.”

Because it’s the last time this many grilled cheese heads will congregate in one place, Walker announced that this year’s event would include another contest: A final, fifth competition heat, where all previous Grilled Cheese Champions are invited to compete for the grand crown, the Final Grilled Cheese Champion.

Walker promises he has new, equally enticing food events up his sleeve, because like the ambassador of dairy that he is, his work is never done, even when he’s off the clock.

Tickets for this year’s Grilled Cheese Invitational will be on sale next week.

See the complete announcement below.

In the dark and wretched days, the grilled cheese sandwich, arguably America’s best sandwich, was relegated by most restaurants to the lonely back alleys of the children’s menu. It was held back and stifled by a world afraid of the glorious and mighty power of maximum cheese.

Then, in 2003, a group of friends got together in a downtown Los Angeles artist loft, armed with spatulas, frying pans, and a massive amount of bread, butter, and cheese to battle head-to-head in the hopes of finding out who amongst them was a “Grilled Cheese Champion.” What happened that night in that butter-stained artist loft could easily be described as the best thing to happen—ever.

Thankfully, the world is now a much better place. What started with a handful of friends in Los Angeles has become a national movement, a marching army of cheese fiends clear across the country.

The past eleven Grilled Cheese Invitational events have unleashed a mighty tsunami of grilled cheese sandwiches, thanks to the efforts of thousands of competitors, judges, event volunteers, sponsors, and most importantly—the Grilled Cheese Champions!

Several previous Grilled Cheese Champions have taken their victory and turned it into an enterprise, creating their own restaurants, food trucks, catering companies, food blogs and cookbooks. Places such as: The American Grilled Cheese Kitchen, with two locations in San Francisco; The Grilled Cheese Truck, with a motorcade of trucks rolling throughout Southern California, Phoenix, and Austin; the soon-to-open Greenspan’s Grilled Cheese in Los Angeles; The Grilled Cheese Guy catering and food cart in the SF Bay area—the list goes on and on and on.

There are many other grilled-cheese-centric restaurants, food trucks, rip-off events, and grilled cheese recipe contests as well.

It will be The Last Grilled Cheese Invitational.

We have fought a great battle and we have won. We have had a great time doing so. After many years and soooo much cheese, quite simply, it’s time. Our insane committee of hard working volunteers has done years of backbreaking work to make this event happen and, well, it’s time.

The Last Grilled Cheese Invitational will be a glorious day for cheese!

More details about the event will be released in the coming weeks, but for now, save the date of April 12th on your calendars, for it’ll be you final chance to get cheesy like you mean it.