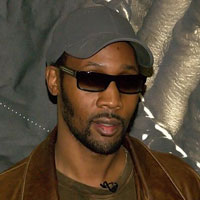 Amid yesterday’s L.A.-centric issue of the New York Times (which included a profile of Jeffrey Deitch and the wedding of some L.A. bigshot), nothing intrigued us more than this tidbit in a story about Wu-Tang Clan mastermind turned filmmaker and kung fu enthusiast the RZA.

“As a chauffeured town car drove him to a favorite waffle restaurant on Sunset Boulevard, RZA said he was no longer the grandstanding show-off he presented in his musical heyday… ‘At this time, I think I was more conceited,’ he said as he sampled from plates of red velvet waffles, onion rings and a vegetarian Reuben sandwich. ‘I’m not going to take no 250, 500 grand from nobody, during this bloom of my life. I played hardball and the deal walked away.'”

Clearly we’re talking about The Waffle on Sunset Blvd. just east of Vine. Read the story and you’ll learn that the rapper, born Robert Fitzgerald Diggs and later known as Bobby Digital, also drops $402.94 at Amoeba and pals around with actor Russell Crowe and horror film director Eli Roth. No word on their favorite waffles.