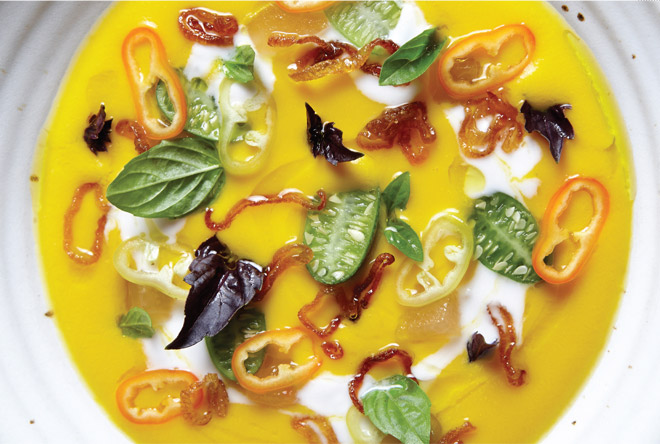 Movies get blamed for inspiring a lot of bad behavior, but we might not have Rustic Canyon’s ricotta gnocchi bobbing in ham broth were it not for that 1990s indie Big Night. Seeing Stanley Tucci and Tony Shalhoub launch a restaurant and put together the meal of their lives inspired chef Jeremy Fox to pursue culinary studies after graduating high school in Atlanta. He went on to make his reputation at Napa’s Ubuntu, an erstwhile vegetarian restaurant whose carbon footprint concerns extended to having employees bike to work and where access to the accompanying yoga studio was through the dining room. Fox became a brand: the brilliantly inventive chef who was pushing vegetarian cooking to ever more refined heights. While other kitchens were preaching nose to tail, he was practicing what he called “seed to stalk.” The San Francisco Chronicle’s Michael Bauer gave Ubuntu three stars; The New York Times’s Frank Bruni raved.

Now that Fox is at Santa Monica’s Rustic Canyon—where an off-the-menu burger is a badly kept secret—he’s free from the confines of a meatless menu. Still, despite a generously carnivorous atmosphere (ham broth not your thing? How about the chophouse-style rib eye with bone marrow bordelaise?), vegetables remain a theme that Fox can’t keep from exploring. If he’s working with a specific variety, he will list it—those are Momotaro tomatoes and Pinkerton avocados served with the burrata. Fox doesn’t see demarcations between vegetables and fruits. He’ll use ripe, juicy strawberries in place of the traditional tomatoes, cooking them down for days in a short rib soffritto. He dries out baby tomatoes to create  “tom-aisins,” dotting them around olive oil-poached halibut with a succotash of corn and sea beans. The desserts might approach the fruit-for-savory equation from the other direction. Pastry chef Laurel Almerinda will take Pudwill Farms blueberries and lay them over a custard cream made with honeycomb-sweet corn.

It all amounts to a style that is as freewheeling as it is full of conviction, where improvisation is considered a means of respect. Pozole in Fox’s hands is not the regular pork and hominy soup but a lean interpretation in which pureéd green garlic and cilantro electrify a jade-colored broth that is packed with mussels, clams, and Napa’s Rancho Gordo hominy. For the salad of summer lettuces, Fox leaves each head intact, stem and all, so that they arrive looking like a bouquet. What he does with Weiser Family Farms PeeWee heirloom potatoes—roasting, then tossing them over a pan gravy thickened with bone marrow roux—transforms a mere side dish into a showstopper. I can’t help but read it as a liberating gesture. Even as he celebrates produce, he seems to be saying, “Take that, veganism!”

hen Josh Loeb opened Rustic Canyon in 2006, he had only a vague sense of what he wanted it to be. As a Cal student he’d gravitated to such north Berkeley institutions as the Cheese Board and Monterey Market. He tried his hand at magazines (fact-checker in New York), got a short internship at Chez Panisse, and worked in L.A. under Bruce Marder for four years as everything from host at the Broadway Deli to wine director at Capo. By 31, Loeb knew he hated pretentious, “ego-driven” food. What he loved was wine and the atmosphere of the Rustic Canyon house where he’d grown up—and where he lives today with his wife and business partner, pastry chef Zoe Nathan. The two have gone on to launch Huckleberry and Milo and Olive along the same stretch of Wilshire as well as the Sweet Rose Creamery in the Brentwood Country Mart. Though they’re different from one another, they share a low-key atmosphere that is as idealistic about extending a warm hospitality as it is about hitting the gastronomic marks.

To call their flagship a destination might do it a disservice. Located near 11th and Wilshire, across from a Chabad center and a fashion consignment store, the restaurant is first and foremost a neighborhood standby. There are no staff uniforms. Old paint peeks through worn patches on the heel-beaten wood floor. Above the bar is a chalkboard listing good beers like the Lost Abbey and interesting wines, including a rich selection of half bottles—an increasingly rare treat that allows for the occasional splurge (a steely $40 Merry Edwards sauvignon blanc for me). With a wall of windows and a row of always-packed booths, Rustic Canyon typifies that far-Westside place where you can throw on a James Perse long-sleeve and head to when the fog rolls in.

Fox’s arrival at the restaurant nine months ago was almost a watershed moment. He was on an upward trajectory, serving as chef at the haute Manresa in Los Gatos (where he worked with Bäco Mercat’s Josef Centeno) and being named one of Food & Wine magazine’s Best New Chefs in 2008. He could have moved from Ubuntu and further established his name by climbing another Bay Area peak. Instead he pulled up stakes and migrated here, to a restaurant whose ambitions have never impinged on its mellow vibe. There are moments when you can almost hear the whipcrack of technique slice through the dining room’s bubbling voices.

Fox has made gougères, a onetime cocktail party classic, wonderfully contemporary. Laced with porcini, the ball of choux pastry bursts with the cheesy sauce at the touch of the tongue. When Fox is doing rustic, he comes at it in the most indirect ways. He peels peas individually so that they split into two parts, a laborious task that would lend the dish an almost uptight feel if he didn’t toss them into a ragout with chips of white chocolate and macadamia nut—an idea inspired by a Mrs. Fields cookie. Fox reenvisions that old bistro standard French onion soup as a slice of grilled country bread bearing a thin layer of pickled ramps under a blistering crust of Gruyère. Once the dish  lands on your table, the waiter pours a thin ribbon of golden consommé into the bowl.

It’s a cheeky balancing act between what is an extremely refined presentation and the restaurant’s m.o. I sometimes wish other aspects of the operation were as well balanced. Rustic Canyon calls itself a wine bar, but by-the-glass reds are served far too warm—which is particularly noticeable the closer they climb toward $20 per pour. And when a waiter tears the foil capsule off a bottle at your table, it can seem a little indelicate for a dining room featuring such carefully calibrated food.

Loeb has never wanted so much as an immersion blender in the kitchen (and God forbid a fashionable Cryovac machine). In his restaurants it’s the pristine ingredient that dominates. That was the case when Samir Mohajer was sourcing avocados from J.J.’s Lone Daughter Ranch of Redlands for a salad with tender lentils and lime, and when Evan Funke would run sweet corn agnolotti for only a brief window at the height of summer. Those tendencies suit Fox well. He is a craftsman who deals in perfectly executed whimsy, but his cooking reveals a certain searching quality. You can follow one vein on the menu and eat happily in a polished Cal-bistro style. The spinach salad, a gorgeous stack of sprightly leaves, is punched up with garlic, capers, and anchovies that have been slow-cooked to a finely sifted mix. The deboned half chicken is flattened and crisped before being ringed by a curry-tinged jus and set on a mound of baby squash. Matsumoto Farms nectarines glisten in an almond poppy crumble, a scoop of pluot sorbet (each spoonful the essence of the fruit) a reminder that we’re blocks away from the world’s best farmers’ market.

But it’s as if he had to reach Santa Monica to really explore a key part of his heritage, the cooking of the South. Not that he comes out and says it. Under Fox the kitchen has merged those tendencies with inspiration from his upbringing in the South. For a growing number of chefs at spots around the country—including the superb Hart and the Hunter in West Hollywood—that region’s cooking has become an ideal in much the same way that California has been for so many others. Both share an unshakable belief in the importance of the single ingredient. The tender shell beans Michael’s was serving in the ’80s are a West Coast counterpart to the supersmoky pork belly that Allan Benton produces in eastern Tennessee or the organic coarse grits ground with old-time care at South Carolina’s Anson Mills.

I wouldn’t label Rustic Canyon Southern by any stretch, but the region certainly provides an interesting bridge between all the elements of Fox’s cooking. Smart and witty, his technique is fueled by a delight in what grows in the ground. Boiled peanuts cooked in African spices squelch as you pop them open in your mouth. A side dish of slow-cooked collards arrives bathed in an intense “potlikker,” the moniker given to the delicious juices left behind after braising field greens. I’m not sure that removing the fat from pork belly to make a terrine succeeds (pork belly, equal parts meat and fat, seems like nature’s ready-made terrine). The result is dry, but the fried pig trotter is magnificent. Formed into a little puck of breaded meat, it rests on a creamy egg salad that has been hand chopped. Scattered over the golden surface is what Fox calls “redneck caviar,” a bracing mix of okra seeds, corn, red onions, peppers, apple cider vinegar, and stone-ground mustard that counters the pork’s richness with its flash of acidity. You could say it’s a garnish, but that would imply a lesser importance. In fact, I don’t know which element is doing the leading and which the accompanying in this brilliant dish. And that’s pure Jeremy Fox.

Take-Out Tip of the Day: Rustic Canyon Is Dishing Up Fancy Family-Style Dinners