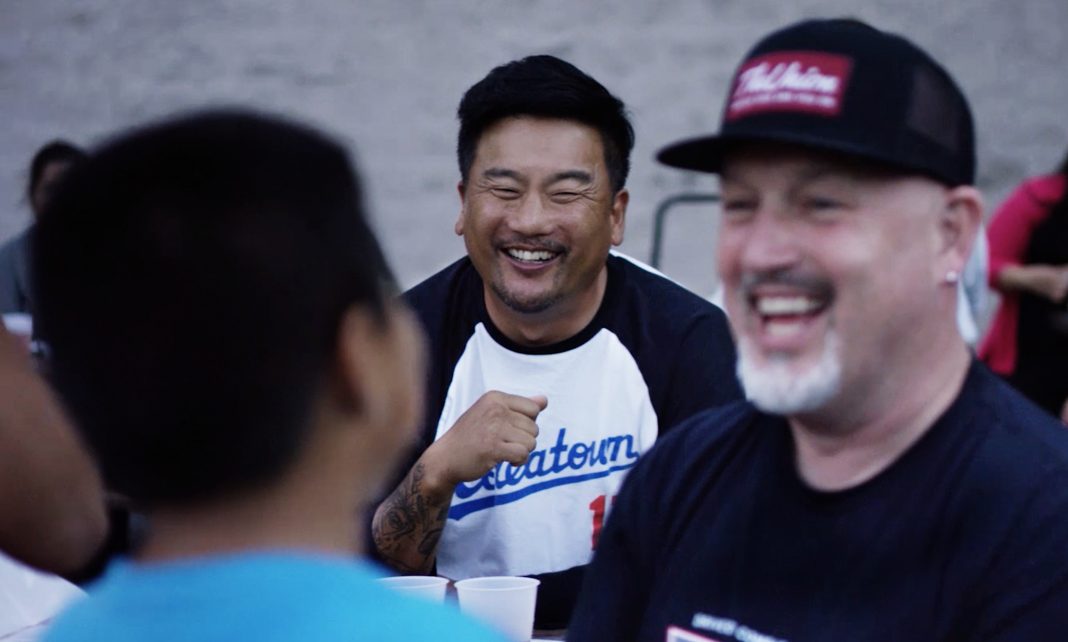 Roy Choi didn’t want to make just another glossy, globe-trotting food show. For his new show, Broken Bread, he didn’t even want to leave Los Angeles. What he wanted to do was use the platform he was presented with to talk about things like immigration, poverty, environmental sustainability, and the power of the kitchen to provide a safe and even life-changing place for people who need it.

Over six, half-hour episodes, Choi travels across Los Angeles County, meeting with people who are using food as a way to make meaningful change. He meets with Mar Diego of Dough Girl, who uses her pizza shop to employ, house, and care for teenagers who’ve gotten caught up with drugs and violence, Father Greg Boyle of Homeboy Industries, which employs former gang members and victims of domestic violence and provides job training, Roger Egger who is turning food waste into meals for the needy with L.A. Kitchen–and even Cheech Marin.

The series, a collaboration between KCET and Tastemade, debuts on Sunday with an event at the Wiltern, presented as part of the L.A. Times Food Bowl. After that, the series will begin airing on KCET on May 15 and PBS SoCal on May 20, as well as streaming though Tastemade TV.

In advance of the debut, we talked to him about his activism, how he puts his values into his work, and why it’s worth investing in a really good sound system for your restaurant.

Lots of food shows have a chef traveling to exotic places or making beautiful food in slow motion. You went a different direction, making a documentary about social justice here in L.A. What inspired that?

It’s hard to get a TV show. I don’t know if there’s another one I have on the books, but I had this one, so I knew I wanted to use this opportunity to talk about the things I really care about.

And I wanted to turn the camera on other people who care about these things as well, but don’t get the shine all the time, even though they’re out there every day actually trying to fix the issues. Individuals who are pushing back against the corporations, the problems created by government and lobbyists. They challenge us to take a look at these things and question them, say maybe this is not the way we’re supposed to live. That’s what inspires the show, and what we’re here to represent.

What did you learn from the people you interviewed for the series?

The people we interviewed are all so powerful and I learned so many things. Let’s just take the first episode, those words that Father Boyle said are also kind of the guiding principles of the show. Enemies that used to shoot at each other are now making croissants side by side. What if you change the compass of the world, so you focus less on “winning” and focus instead on love?

Look at Mar Diego who is selling pizza and changing kids lives. She works with the kids who have been thrown out by society. They have nowhere to go, they’ve been impacted by the opioid epidemic in our country, by an education system that doesn’t allow for people who learn differently, a system that spits them out on the streets, feeling like they don’t belong. So with her pizza shop, one kid at a time, she invests in them and builds their strength. I was so inspired.

“Society tells you all the time that you’re too idealistic, or naïve, but maybe that’s not the case. We don’t have to be complacent.”

The things I care about, there are other people who care about them. Society tells you all the time that you’re too idealistic, or naïve, but maybe that’s not the case. We don’t have to be complacent. We need to care. Caring doesn’t mean you can’t still have a sense of humor, be sarcastic, have fun. You can be all those things, but also be mindful and try to help people.

In your own restaurants, you have a philosophy of hiring people who may come from a variety of different backgrounds. How have you seen that work in your businesses?

I don’t judge. I don’t care where you’ve been on your way to arriving in my life, I only care about who you are in the moment, and if you can trust me. I don’t even have to trust you, yet. You can make mistakes with me. I want to create a space in the work environment–and also in the front of house environment–where someone can come as they are. My attitude is, we’re going to do the best shit possible, and you’re going to be a part of that.

“I’m clear about how I work, including reducing profit margins in order to ‘profit’ in other ways, like having a staff that is healthy, happy, able to live well, and feels inspired.”

I’m very fortunate, but I have not gotten push-back on this from corporations or investors I work with. I’m very clear about this whenever I get into a relationship. I’m clear about how I work, including reducing profit margins in order to ‘profit’ in other ways, like having a staff that is healthy, happy, able to live well, and feels inspired. The people who work for me know they have support, know they don’t have to worry about the next paycheck, and that in return, they have a responsibility to give more and care more about what we’re doing together. You don’t get those results if you only care about the bottom line.

Music is very important to you, and a big part of your restaurants. Did you want to bring that to the show as well?

With Best Friend, I told them, we have to get subwoofers. It’s important to create lots of bass in a restaurant, I believe that. If I didn’t have the right partner, they would say that line item doesn’t make sense. They would ask, “Why should we spend tens of thousands of dollars on the sound system?” But I would explain that the return on investment comes in multiple forms, in the culture of the place, how it makes people happy.

For the show, I knew we needed great music. It needs that poetic undertone. This show couldn’t have that, like, stock music you download. I started thinking of composers who could do original music for us, and Dan the Automator–from Deltron 3030, Handsome Boy Modeling School, much more–just felt like the right fit. Sonically, he uses a lot of keyboards, strings, violins, drum machines, and he creates different moods. I thought that he would be a really good return on investment for the show.

Other than the score, what was the process of producing your first television show like?

We invested a lot in making this show. We’ve been spending countless hours in the editing room. It’s been an enormous amount of time, brain power, resources, money. We brought in the best of the best that we could to try to make the best show. My vision was for this to be an important show that talks about important things, but for it to also be a show that’s really entertaining .

Look at who is making this show. It’s KCET, public television, which is an institution that really allows the whole story to be told, because it’s not driven by advertising. And Tastemade, a media company that has such a voice with the current generation and the future generation. And then you have me, and I’m on the ground. This is about the life that I live, that I care about, and now I’ve got a chance to share that with the rest of the world.

“People say they’re interested in these things, but you don’t actually see it represented all the time in mainstream television.”

The big question will be, is the rest of the world interested in that, too? People say they’re interested in these things, but you don’t actually see it represented all the time in mainstream television. We want to take the people you don’t see and bring them out and make it a part of the mainstream.

Are you thinking about doing a second season at this point?

I would love for there to be another season of the show, but it doesn’t matter to me if I am the main person again, or if it moves to be many more seasons with more people in different places. What I’m interested in is changing the landscape. Changing television so that we have highly watched, very visible shows that cover the kind of people and topics that this show addresses. I want to see that become a part of popular culture.

It’s been an eventful last year or so in your life, with restaurants opening, moving, producing this show, and working on a variety of projects. How are you handling everything?

It’s not hard when you love to do it. It’s not hard to love your family when you really love them. If you really care about something, it’s not a burden. That’s how I keep it together. I try now to only do things that I’m really, really passionate about. I’m in a place where I’m at peace enough to turn down things that may be lucrative, but that I may not love. Everything I do, everywhere I am, it’s exactly where I want to be.