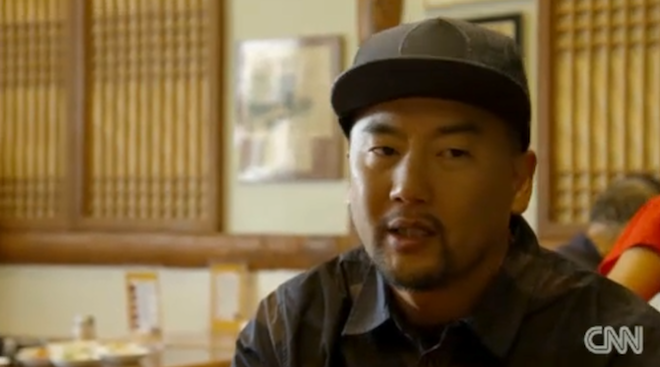 Last night, CNN aired the second episode of the first season of Anthony Bourdain’s new show, “Parts Unknown.” Hot on the heels of his critically acclaimed ratings darling “No Reservations,” “Parts Unknown” allows Bourdain to continue carrying his food discovery torch as he seeks entry into physically challenging or politically controversial terrain. It’s all in the name of cultural awareness and good food. But sometimes, cultural awareness and good food don’t require a plane ticket.

The second episode of “Parts Unknown” featured local Chef Roy Choi. Amidst scenes full of sexy street art, scorching spice and L.A. history, the two bad boys took a ride through K-Town together to explain why Korean food hasn’t changed much, even though it’s existed in L.A. and other parts of the U.S. for decades.

This morning, we caught up with Choi to see just how the episode came together.

Wait, first, how did you meet Anthony Bourdain?
I met him as he walked into Ham Ji Park on “The Layover” shoot (in 2011), in a cobalt blue button down shirt, and we connected mid-conversation like we knew each other from an alternate life.

So, how did this K-Town episode come to be?
Zero Point Zero Productions (ZPZ) called me and said Tony wanted to go deeper into L.A. and Koreatown. Tony has many Korean friends and there are a few Koreans that work at ZPZ as well. We all knew there was a strong storyline and the platform that CNN was giving him provided a chance to tell it. It was humbling that they really wanted to know about me, our town, and the riots.

It was a chance to just show our streets as they are, not with any right or wrong, just as they are. It all happened over a few phone calls with their amazing production team.

Ok, last question: Can you tell me how the restaurants featured in the show were chosen?
They let me guide them through a lot of my real life. But they did their research as well. Tony is a fiend for information and culture. He does his homework. They were a mix of my lists and theirs and we narrowed it down to try and give a full story of what really happens between Western/Olympic/Beverly/Vermont.